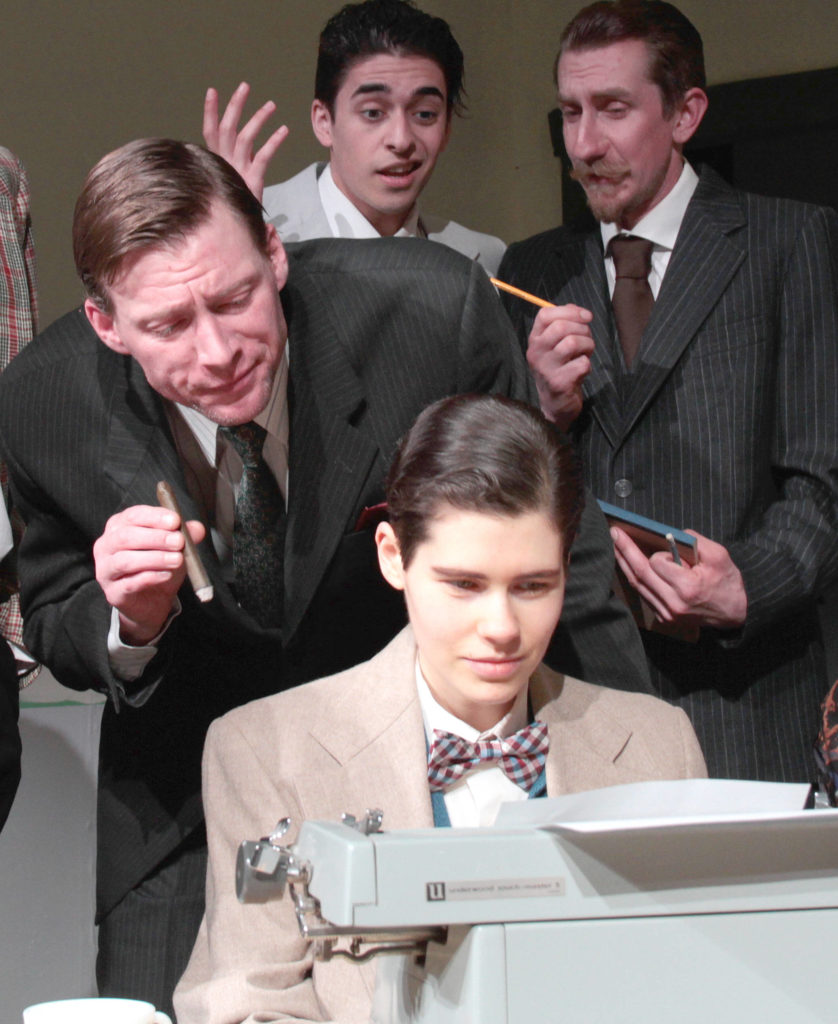 There are solid laughs galore in White Rock Players Club’s current production of Laughter on the 23rd Floor.

Neil Simon’s witty, slightly fictionalized recreation of his early days as a staff writer for legendary television comic Sid Caesar offers a grand opportunity for an ensemble to shine. And, by and large, the cast of the current production at White Rock’s Playhouse have taken it and run with it.

Smooth and thoughtful direction by Lance Peverley keeps the pace from flagging and ensures that this depiction of life in the writers’ room of the weekly variety show starring ‘Max Prince’ – circa 1953 – hits all the comedic high notes.

Sparking the proceedings is a terrific, energetic performance by Nikolas Perry as the volatile, paranoid, perpetually-stressed star. He adeptly balances the wall-punching fury of Max with quieter moments that reveal the man’s underlying sensitivity and caring nature.

It’s a rounded portrait of an unpredictable, deeply-troubled man that manages to suggest not only his comic ability in front of the cameras, but also why his writers like and are loyal to him.

As Simon’s counterpart Lucas, who narrates the action and introduces the characters, Adrian Shaffer’s performance is unfailingly earnest and conscientious, but also very low-key. Such a muted interpretation can only seem colourless in comparison with the fireworks provided by the other zanies of Max’s writing team.

In fairness, the part, as written, offers little to work with in that regard – just as in real life, it appears that Simon has given all the best lines to others.

Among these are the hypochondriac, combatively egotistical Ira, played with great assurance and comedic urgency by Callum Henderson; and the sartorially-splendid, eternally wisecracking, angle-playing Milt – portrayed appealingly, and with equally fine timing, by Daleal Monjazeb.

As staff writer Carol, Rebekah MacEwan provides an outstanding characterization that imbues the production with a strong sense of the sophisticated New York liberal milieu, while the always-reliable Buettner offers a delightfully nuanced portrayal – and an unwavering Russian accent – as constantly bemused head writer Val.

Chelsea Brown, Diane Grant-Booth and Jean Tolladay’s costumes mix eras willy-nilly, but are sufficiently retro – no doubt – to pass as 1953 with most play-goers.

Technical work is strong, however, and Bridget Browning and Demetrios Georgeadis’ sound design provides welcome reminders of the period, while Don Briard’s set is convincingly evocative, and well-decorated by Rosemary Schuster and Partridge, apart from a few glaringly non-period newspapers and periodicals.

Laughter on the 23rd Floor continues at White Rock’s Playhouse until June 29.

MINTY: It’s time to save Surrey Little Theatre before it’s squeezed out of Clayton