SURREY — Hedley is a pretty big deal these days, having recently played to thousands of screaming fans at Rogers Arena in Vancouver. Back in 2005, however, the band was fit to play a relatively dumpy bar in Newton.

In February of that year, I wrote a story about how “Canadian Idol-powered musician Jacob Hoggard will debut his retooled band Hedley during a Surrey club date” on a Wednesday night.
“The (show) at the Ozone will feature the singing apprentice carpenter in concert with a band that’s creating some buzz on the Canadian music scene,” I wrote about Hedley, which sounded more like Sum 41 and blink-182 at the time.
“Hoggard has become a bit of a star since he made it to the top three of the ‘Idol’ competition last fall before losing to eventual winner Kalan Porter.”
My story went on to report that “Hoggard said he enjoys construction work but ‘lives and breathes’ music and hopes his stint on Canadian Idol will offer him a chance at his ‘once-in-a-lifetime dream’ – to sing for a career.” 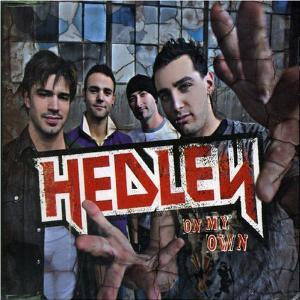 Hedley’s gig at the old Ozone, which has since been torn down, was to also feature guest bands The Heck, Superbeing and Viv Savage (a most excellent nod to the keyboardist of Spinal Tap fame). Tickets were priced at $10 at the door, at 7300 King George Hwy.
(PICTURED: Hedley in a photo for the single “On My Own,” released in the fall of 2005.)
Later in 2005, in September, I interviewed Hoggard about Hedley and his time living in Surrey.
“I officially quit my (construction) day job four months ago, so music is all I’m doing,” he told me at the time. “What we’re doing now is very hard work, so I’m not sure what’s better,” he added with a laugh.
Hoggard, then 21 years of age, was born in Burnaby and soon moved to Surrey, where he and his family remained for the following 18 years. He then moved to Abbotsford, a city which took credit for “raising” the musician when Hoggard made his way to the top three of the previous year’s ‘Canadian Idol’ contest on TV.
The record label-approved band biography in 2005 painted Hoggard as an unpredictable, lip-ringed ham, a “charmingly obnoxious” character who drinks and parties a lot.

During his school days at L.A. Matheson secondary in Surrey, Hoggard told me he “was the kid who was sitting outside the classroom all the time, just for being an idiot and being loud. Every single report card said I talked too much. So that’s good for being a frontman and singing and dealing with the media and writing songs. It’s all good. I get away with a lot of stuff.”
(PICTURED: Poster for another gig at Surrey’s old Ozone club, featuring Vanilla Ice and Maestro, in September of 2005.)
Prior to 2005, a previous incarnation of the Hoggard-led Hedley used to play Stardust roller rink and at North Delta’s Firehall arts centre – not far from where he lived, at 91st Avenue and 126th Street.
“That’s where it was at,” he told me.
“Those were good years.”
tom.zillich@thenownewspaper.com

SUMMER IN SURREY: Ten cool events to hit when the weather is hot