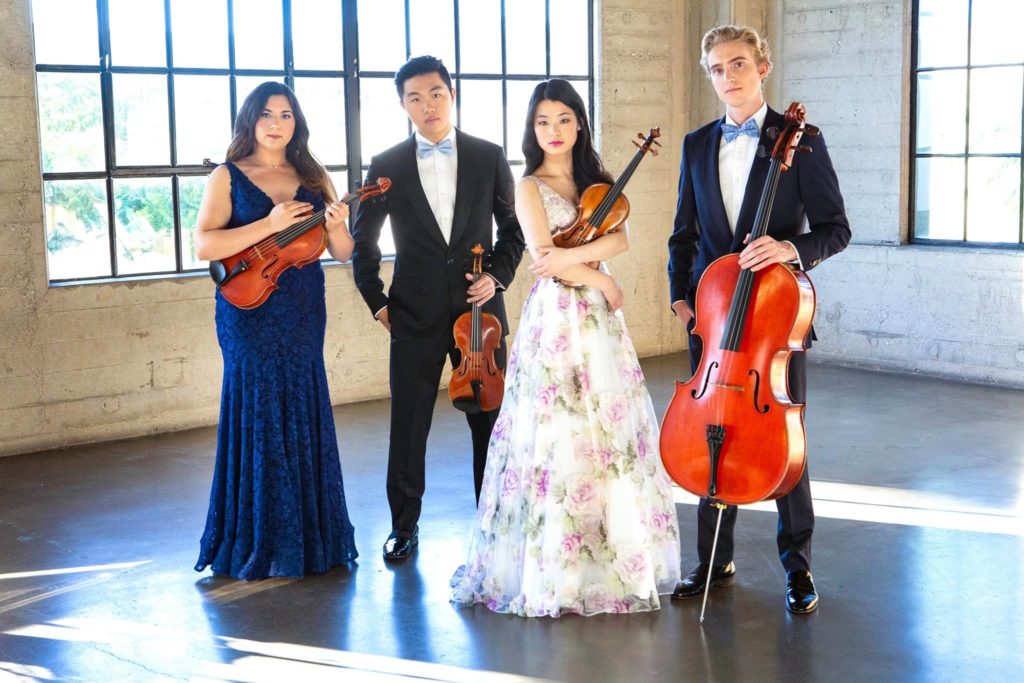 The Viano String Quartet, first prize winners of the 2019 Banff International String Quartet Competition, were among artists slated to appear in White Rock Concerts upcoming 2020-2021 season, now cancelled. The subscription series’ board is hopeful that much of the planned season can be rescheduled for 2021-2022, however. (Contributed photo)

A pleasure postponed – it is said – is a pleasure prolonged.

So must it be with the White Rock Concerts series, which has cancelled its entire 2020-21 season in light of the uncertainty of health risk as a result of the COVID-19 pandemic.

Subscribers were informed at the end of June of the decision by the board of the organization, which has been presenting classical concerts by professional touring artists in various Semiahmoo Peninsula venues since 1956 – latterly at White Rock Baptist Church. But board president John Leighton said they are still optimistic that a return to live concerts will be possible in time for 2021-2022.

The last concerts in the 2019-2020 season had already been curtailed in March as a result of the declaration of the pandemic emergency, but Leighton said the board – including series founder and Order of Canada recipient George Zukerman and artistic directors Elizabeth and Marcel Bergmann – realized it was necessary to decide the fate of the next season rather than holding out overly-optimistic hopes that concerts would be possible by the end of this year.

“We’re a bit hampered by our business model, which is presenting our concerts at a very, very low price by offering them to a large audience in a packed church,” Leighton told Peace Arch News, noting that while the series appeals to a broad range of listeners, many of its fiercely loyal subscribers are in their senior years.

“It’s just not in the cards given our demographic – it’s just not realistic,” he said. Observing necessary and desirable social distancing safety requirements would preclude presenting the kind of artists the organization wants to feature, he added.

“We wrestled with this decision but it became increasingly apparent that it would be very unlikely that we would be able to resume the presentation of live concerts for the foreseeable future, even if there were some modest relaxation of current public health restrictions.

“With a membership of 775, and typically 650 attendees at any single concert, sitting close together in church pews is not going to be possible for some time to come,” Leighton added.

Helping tip the scales toward the decision, he said, was learning that the Vancouver Symphony Orchestra has also scrapped its Vancouver season as well as outlying concerts.

It’s also in the business interests of both series and performers to avoid ‘force majeure,” (unforeseeable circumstance) cancellations wherever possible, he said.

Putting the continuing uncertainty to rest meant the board could start planning for the future, he noted.

“We’re hoping that by letting next season’s artists know that we are postponing it as early as possible, we’d have a chance to get many of the same artists on board for the next year,” he said.

Concerts planned for the 2020-21 season included a performance of Rodrigo’s Concierto de Aranjuez by guitarist Daniel Bolshoy and violinist Jasper Wood with the John Avison Chamber Orchestra; a celebration of the 250th anniversary of Beethoven’s birth with an all-star Vancouver ensemble introduced by Zukerman; and a concert of Spanish music by four pianists (including the Bergmann Duo) and four percussionists.

Also scheduled were an evening of pieces inspired by the city of Venice with the Danish-Latvian Carion Wind Quintet; a concert featuring Beethoven’s Eroica-Variations by noted pianist Angela Hewitt; a ‘best of’ concert by Vancouver’s celebrated Chor Leoni Men’s Choir and a performance of Brahms’ Clarinet Quintet by the Viano String Quartet and clarinetist James Campbell.

Leighton said the Bergmanns are working on reassembling as much as possible of that line-up for 2021-22, with hopes that at least the Vancouver elements will be relatively easy to re-schedule.

Fortunately, the series reached its year-end financial statement with a surplus – primarily because of costs avoided by the cancellation of two concerts at the end of last season, and Leighton said that surplus will likely be returned to members in the form of additional concerts or a donation to the next season’s membership.

The series has not accepted any money for the 2020-21 season, he added, returning cash for early subscriptions and securely shredding cheques received.

Members are being encouraged to check the series’ website – whiterockconcerts.com – for further updates, Leighton said.

And there may be further benefits to members while major series concerts are on hold – Leighton said the board is exploring the possibility of creating brief video vignette concerts that could be presented online through a YouTube channel on a regular basis.

“We don’t see doing anything too involved, it might be small ensembles,” he said.

“But the idea is to provide our members with something once a month – we call it member engagement – to show that we’re still thinking of them.”