SURREY — Those hoping to establish a professional orchestra in Surrey are just tuning up for their time in the spotlight.

A 15-page business plan for such a venture was presented July 19 to the city’s Culture Development Advisory Committee by Ellen Farrugia, who is spearheading the effort.

The North Delta-based musician is aiming to have a pro orchestra perform a debut season of five concerts in Surrey starting in the fall of 2019, with a startup budget of $200,000.

“If Surrey wants to be a serious city, it’s got to have an orchestra,” Farrugia told the Now. “I think it’s about time.” 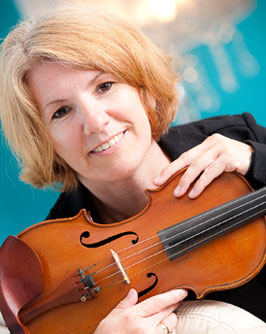 It’s all sounds like music to the ears of culture-minded Surrey residents and groups, along with some key staff and councillors at city hall.

“Right now (Farrugia, pictured) needs some people to help get this initiative off the ground, a good board of directors, and I’m hoping she can do that,” said Judy Villeneuve, chair of Surrey’s culture committee.

“It’d be wonderful to establish a local orchestra here to support our young musicians who are graduating from universities, to allow for performances south of the Fraser, and we now have a level of people in the community that could support it.”

A Surrey City Orchestra was established here in 2009, but it took a final bow after a couple of years.

Farrugia had performed with the ensemble, which was led by Wayne Jeffrey and Calvin Dyck, but she plans to do things different this time around.

The previous effort didn’t have a board of directors or society status, making it unsustainable, she said.

“They (Dyck and Jeffrey) wanted to get the product out there first and do performances, but this does the reverse,” Farrugia told the Now.

“We need to establish a working board at this point,” she continued. “I have people who have expressed an interest, but we need to get those three top postings, some really influential people there, because something like this does take a huge amount of networking to get enough support to get it off the ground.”

The orchestra would involve 31 to 37 musicians performing “professional live music that engages and enhances the lives of Surrey’s diverse population,” according to the business plan.

The debut season of a new Surrey City Orchestra, which is a working title for the organization, will “distinguish the SCO as something different and distinctly Surrey,” the plan notes.

“The programming will include a range of repertoire from the traditional classics, to South Asian influences, symphonic pop, move and video soundtrack and choral offerings.”

In order to achieve its goal of reaching out to Surrey’s multicultural demographic, the orchestra “will be flexible in terms of orchestra size, type of music performed, arts groups with which it partners, performance venues and target audiences.”

Currently in Surrey, the Vancouver Symphony Orchestra, or VSO, is the only pro organization that regularly presents live orchestral music, in concerts held at the Bell Performing Arts Centre.

The Surrey-based orchestra doesn’t aim to compete with the VSO, Farrugia noted.

“This would be more about partnering with community members here, such as the Naad Foundation, Hanyang Arts, various dance companies and choirs here and, most importantly, the Surrey Youth Orchestra, too.”

Farrugia first appeared before the city’s culture committee about 18 months ago to outline her dream of a pro orchestra for Surrey.

Since then, she said, a City Speaks survey revealed strong community support for the initiative.

“I haven’t had anybody not be positive about it,” Farrugia said.

A timeline for the launch of the orchestra includes plans for gala fundraisers in the fall of 2018 and spring 2019. The financial plan calls for first-year revenue from gala ticket sales and an auction, plus individual and corporate donations. In years beyond, grant revenue and ticket sales would kick in to help make the orchestra profitable.

Farrugia said she hopes to present her vision for the orchestra to Surrey business groups this fall.

CRIMESTOPPERS: ‘Most wanted’ for the week of August 7

IHIT identifies victims in South Surrey shooting, one person taken into custody but not charged