Into a big Surrey building that once printed newspapers, film crews have brought lights, cameras and action not meant for the general public to see, or even know about.

A veil of secrecy tends to surround Surrey Studio City, the new name of the former Pacific Press plant located on 88th Avenue in Kennedy Heights, east of Scott Road.

These days, the place buzzes with filming of Pachinko, described as “a chronicle of four generations of a Korean immigrant family” on imdb.com, in an Apple TV+ series based on the 2017 novel by Korean-American author Min Jin Lee.

The series has caused the parking lot of Surrey’s largest film studio to be full of trucks, trailers and tents, and in one area a backlot is being built for outdoor scenes, much like the one created at Cloverdale Fairgrounds for Superman and Lois shoots.

“It’s quite significant in size, and it’s good for Surrey,” James Monk, the city’s filming manager, said of the 200,000-square-foot studio. “Productions can film there and also use the space for set construction, and they can set up their production offices there too,” Monk added. “So it’s almost a one-stop-shop for film productions, whereas some productions can’t house everything under one roof like that, they have to spread out a bit more, in other parts of town. That building seems to accommodate what productions are looking for.”

In 2016, more than a year after the printing of Vancouver’s largest daily newspapers had stopped, Skydance Media moved in to start shooting a new Altered Carbon TV series for Netflix. During a media event that fall, giant ceremonial scissors were used to cut a grand-opening ribbon, as Hollywood types, local film-industry folks and politicians gathered to celebrate the arrival of a big-time film company in Surrey.

But after just two seasons of sci-fi drama, Altered Carbon was scrapped and the Skydance logo scraped from the concrete wall at the studio entrance, where a guard tower stands and security shoos away anyone hoping to take a photo of the place. 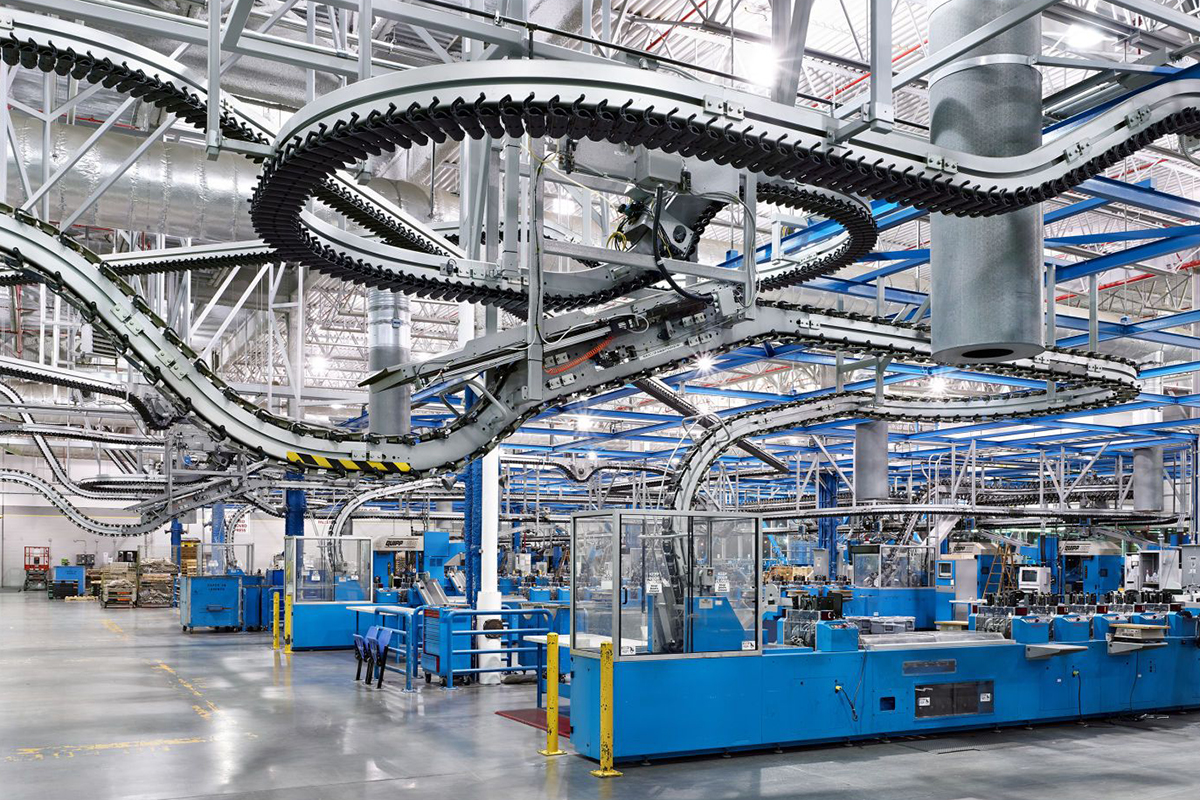 His company bought the property and empty building in 2015, after Post Media vacated.

“At the time, we didn’t yet have a clear vision of what was the best use of the building,” Sandhu recalled. “We tried all sorts of things, like warehousing. There was a lot of interest in the property – a Playland type of thing (was considered), ice rinks, all sorts of stuff, electric car manufacturing.”

When Sandhu and others learned that some filming was done in the building during its newspaper-press days, one thing led to another, and a lease with Skydance was signed.

“We started off with just an empty warehouse in 2015, and we now have top-quality filming studios there,” said Sandhu, proudly. “There’s quite a lot of construction inside, and if you see the outside now, they’ve put up a lot of façades supported by scaffolding, so it’s going to look like a big city there, outside.”

Inside, “rain” can fall for filmmaking, Sandhu added. “We have a water collection system for that.”

Some interior and exterior photos of the studio are posted to lionestateconstruction.com, a website for the construction and management arm of the company.

Back in 1997, the purpose-built newspaper factory opened as the most technologically advanced printing press in the world. It shut down just 18 years later, due to shifts in the publishing industry. During its run, a staggering amount of materials were used, including close to 750,000 rolls of newsprint (each 13 kilometres in length), 5,000,000 kilograms of black ink, 3,000,000 kilograms of colour ink, and hundreds of thousands of press plates.

• READ MORE in story from 2015: Closure of printing press marks end of era in Surrey.

“The printing press was built for a cost of around $50 million,” Sandhu said, “and then they put in equipment worth around $110 million, so the total cost was about $160 million. It’s a very good size property, 13.81 acres. There aren’t too many parcels of land in the city that large. When they’re filming, that whole place is absolutely packed. In fact, they don’t have enough space.”

A professional engineer, Sandhu said he was attracted to the building due to his previous work building pulp and paper mills.

“I had just about retired from that at the time, and a friend mentioned this building for sale, one with a printing press inside,” he remembered. “A printing press is almost like a baby paper machine, and that’s something I’ve done all my life. I said, ‘Wow, and the quality of construction is very high.’” 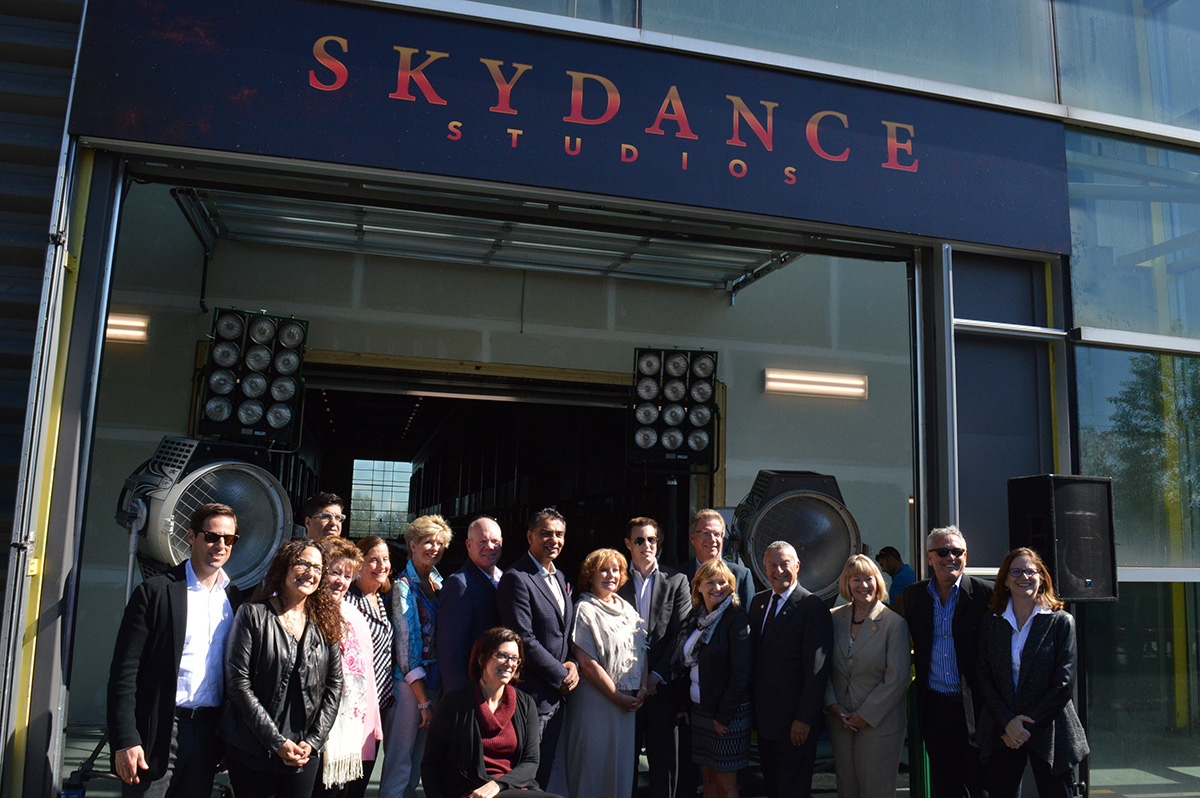 PICTURED: Studio execs and politicians pose for a photo during the opening of Skydance film studio in Surrey in September 2016. (File photo: Tom Zillich)

PICTURED: In 2016, “Altered Carbon” producer John Lenic at Skydance Studios when the studio was built to house five sound stages, including one hailed as one of the world’s longest and tallest such stages, at 460 feet long and 50 feet high. “We’re building a city street from San Francisco 500 years into the future,” Lenic said at the time. (File photo: Tom Zillich)

Asked about potential plans for an ice arena there post-2015, Sandhu elaborated.

“The arena, we ourselves looked at putting that in,” he said. “We had some sketches done for a full-size, NHL-size rink plus a couple of training rinks there. There’s a lot of open space in there, and it’s quite a high-quality-construction building.”

But it never happened.

As for Pachinko, a story posted on deadline.com sheds light on the “epic international drama series,” written and executive-produced Soo Hugh and starring Min Ho Lee, among others.

“Epic in scope, intimate in tone,” the series bio says, “the story begins with a forbidden love and crescendos into a sweeping saga that journeys between Korea, Japan and America to tell the unforgettable story of war and peace, love and loss, triumph and reckoning. The series will be told in three languages: Korean, Japanese and English.”

SURREY NOW & THEN: Public market memories at 64th/King George, and not much more