Surrey’s old “spy house” has quite a story that involves more than a century of change and transformation involving multiple families and different owners.

Today, the Randhawa family operates a neighbourhood pub in the former house, built in 1900 on what was a barren perch in Port Kells, long before the area became a busy commercial-industrial hub.

The “Baron Von Mackensen House,” as the building is officially known, is significant for its association with Baron Carl Von Mackensen, a German national, who purchased the Bryce family home in 1910.

“The house became the focus of social activity in the Port Kells area, with many occasions celebrated there, including an annual Christmas party,” notes a post on historicplaces.ca. “Baron Von Mackensen was well liked by the community until the First World War broke out. Rumours arose about his spying activities, and the Baron was interned at Vernon, B.C., and his property was confiscated and sold. In July 1919, he was deported to Germany.”

The history of the house is told in newspaper clippings and photos that hang on the wall of Baron’s Manor Pub, which has operated there for more than a decade, at 9568 192nd St. 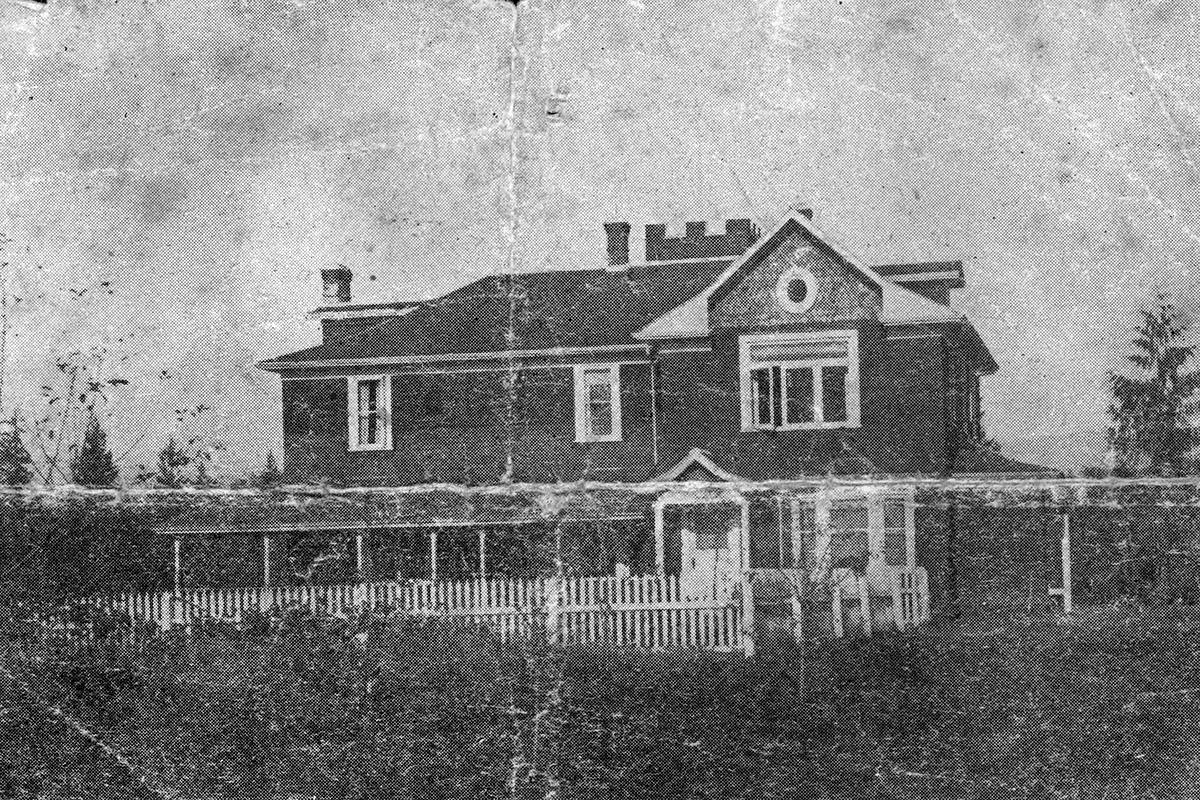 Sarb Randhawa was involved in the total reconstruction of the building in the late-2000s, after it had been boarded up and all but abandoned.

“It was my dad’s dream to do all this, to have this pub,” Randhawa told the Now-Leader. “He had bought this building to operate as a pub, but he died in a car accident in India, on his way back from some charity work he was doing there. He used to do a lot of charity work.”

“Yeah, it’s a tribute to him,” Randhawa continued. “He was excited about it and wanted to get this done, to renovate this heritage building. After he died, we put this site on hold for about a year, and we didn’t know what to do with it. I’m a marine engineer for BC Ferries… I struggled for awhile. It’s a family business, a family operation. My mom works here – she’s 71 and comes in every morning to do the cleaning. She loves it and wants something to do.”

Randhawa said the renovation project totalled $1 million outside and another $1 million inside. “We kept the shell but everything else is new in here,” he noted.

When the pub opened, a man named Bill Mallory sent Randhawa a letter that described his life in the house during the Second World War.

“I have good memories of living in what neighbours called ‘The Castle,” wrote Mallory, who said he lived in the “magnificent” house with his grandparents, John and Laura Miller.

“The house had many distinctive features incorporated,” Mallory noted. “The one obvious feature was a three-storey tower (now reduced) to view the activity on the Fraser River. The spacious interior rooms were of the finest hardwoods and workmanship. An (annunciator) system connected most rooms to the pantry to summon servants. The upstairs bedrooms were connected internally with sliding closet doors. A concrete bomb shelter was included and may still be there today. I would estimate the original property was about 5 to 7 acres in size, most of which was cleared.”

The “Castle” is among the last remaining pioneer homes in the Port Kells area, and is protected under a heritage-revitalization agreement with the City of Surrey.

On the city’s website (surrey.ca), the structure is called “a Victorian Homestead style architectural gem.”

Randhawa said that in addition to the building, his family owns the property and surrounding lots.

PICTURED: Display case at the base of tower at Baron’s Manor Pub. (Photo: Tom Zillich)

On the top floor of the pub, some artifacts are displayed behind glass, at the base of the tower.

“There were some antiques in here, an old telephone, a sewing machine, stuff like that,” Randhawa recalled. “There was a bunker wall, too, and a tunnel of some kind. It was interesting to see all that.… Some squatters were in here at the time so it wasn’t very well kept.” 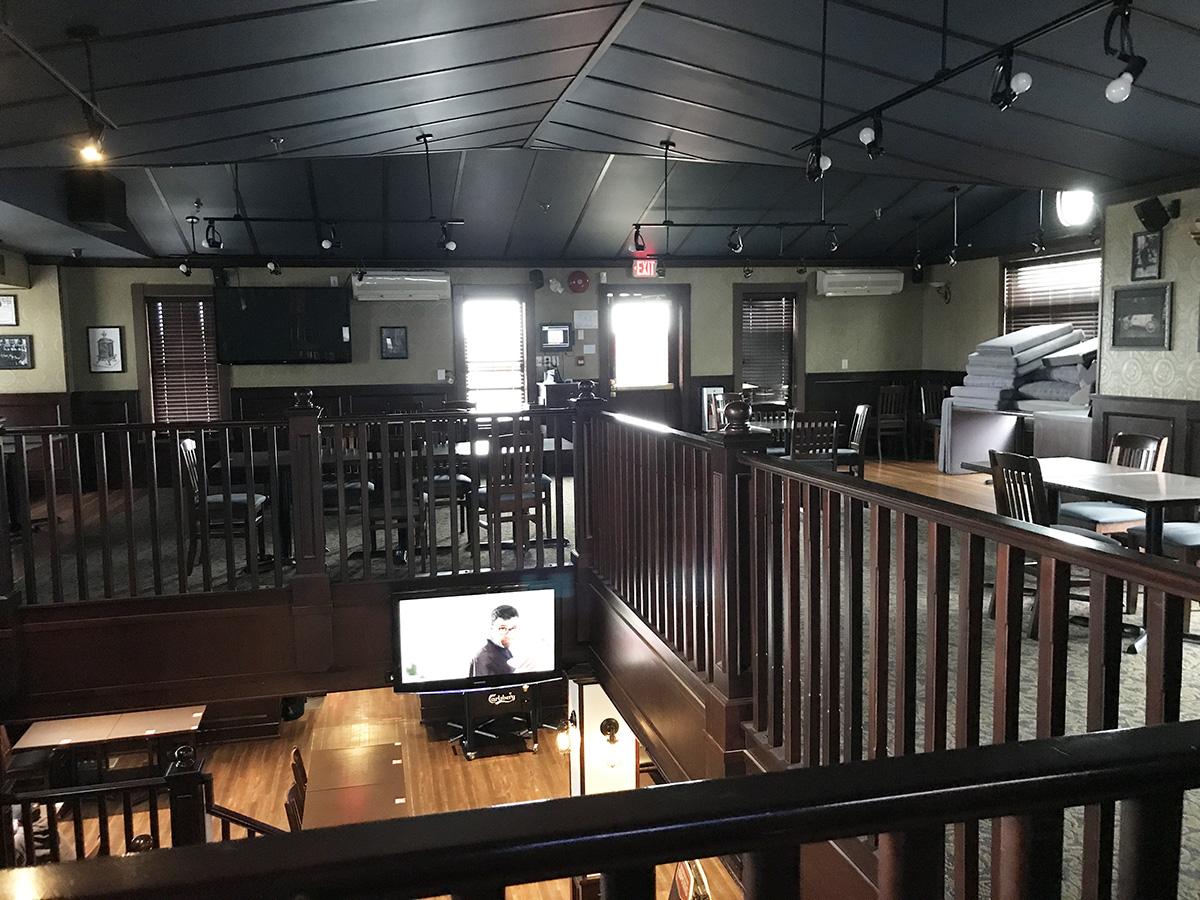 Meantime, the story of Carl Von Mackensen is told on the WestEndVancouver blog, including record of a lawsuit he filed against the municipality of Surrey in 1914 for failure to maintain the roads properly, a year after he was thrown from his carriage and injured.

The blog also documents Von Mackensen’s arrest in a story published in the New York Times, in 1915.

“While Carl was in the internment camp, the Buscombe Security Company sued him to foreclose on some of his real property,” according to the blog.

The Canadian government confiscated and sold his property.

“After the war, Canada deported him to Germany, along with other prisoners. According to some sources, the deportation appears to have been an urgent one. It may have taken away most of the camp’s 1st class prisoners and 2nd class families, at their request, perhaps because of political disputes within the camp.

“Carl tried to reclaim his Canadian assets, and he attempted to restore his reputation, but he was unsuccessful.