Music fans might know Dave Genn as the guitarist in rock band 54-40 these days, but back in the 1980s he was just a kid trying to safely make his way from South Surrey to Bumpers in Whalley for a weekend night of fun.

The teen dance club was a magnet for Genn and other young lovers of modern music in the early- to mid-1980s, when such places existed in Surrey.

“I used to take the bus out there, (and) if it rained while I stood at the Whalley Exchange, then gel and Final Net hairspray would run into my eyeliner and blind me,” Genn recalled during a 2009 interview with this reporter. “I guess Bumpers’ influence was that I realized that I could run faster in my red-leather elf boots than the rockers could in their North Stars.”

His first time at Bumpers, Genn won a dance contest. The prize: An EP of Madonna’s “Like a Virgin” on vinyl.

Throbbing New Order songs or slashing Clash tracks were just as likely to blast from the speakers at Bumpers, which was located in a warehouse at 13465 King George Highway (now Boulevard), at Gateway Drive. Today, it’s home to the Kintec footwear company.

The dance floor was a big, open space in the middle of the 600-capacity room, a former bowling alley. Off to the side, shy kids would lurk in the dark until they built up some nerve to dance to the latest New Wave song.

Among them was Gerald Harper, who first stepped foot in Bumpers as a Grade 8-er, and never wanted to leave.

“It was a school dance,” recalled the former West Whalley Junior student. “It was the most amazing thing ever, and I wanted to be there all the time. The whole nightclub scene called out to me.”

PICTURED: A button given to Bumpers patrons as a marketing effort before the teen dance club changed its name to The Zone. The “TMRW” text was an abbreviation of the word “tomorrow.”

With the guidance of club operators Steve Dubas and Gerald DerWoon, Harper began to play music there, as DJ. He later earned a job at Changes, a more top-40 teen dance club that opened in Guildford at 152nd Street and 101st Avenue, in the strip-mall space now home to Dollar Giant.

Previously known as Patches, Bumpers became The Zone circa 1985, and lasted for another couple of years after that. “When Changes opened,” Harper explained, “I was their first DJ, for those first six to eight months. And by then I was 19 so when you’re that age, you go to real bars, right.”

(Story continues below video of a Changes TV ad)

Such youth-market dance clubs were a “blessing” for kids of the era, Harper agreed.

“It was great as a teenager to have this safe place to go and listen to music and feel like an adult,” he said. “There’s nothing like that now, like what we had. There was Shakers in Vancouver, the Courthouse in New West and Langley had a place called L.A. Club, all these places.”

A franchise, Changes lasted for little more than a year in Guildford before the doors closed. With no liquor sales, the economics probably didn’t make sense, and times were changing.

“I’m not sure there was one thing that caused the end of it all, but there was a growth in violence that happened,” Harper reasoned. “When I was going to Bumpers, maybe there’d be a fight – maybe. But as times went by, there was more of a gangs-and-guns things that started to happen, by the late 1980s. Parents probably thought, ‘Whoa, these places aren’t as safe as they should be, and we’re not going to let our kids go there.’

“The music changed too,” he added. “Rap music started to get bigger. Don’t get me wrong, I like rap and listen to a lot of it to this day, but there is a bit more bravado in that music, and if you think back to the New Wave music of earlier in the ‘80s, it wasn’t about that at all. It was just about dancing.” 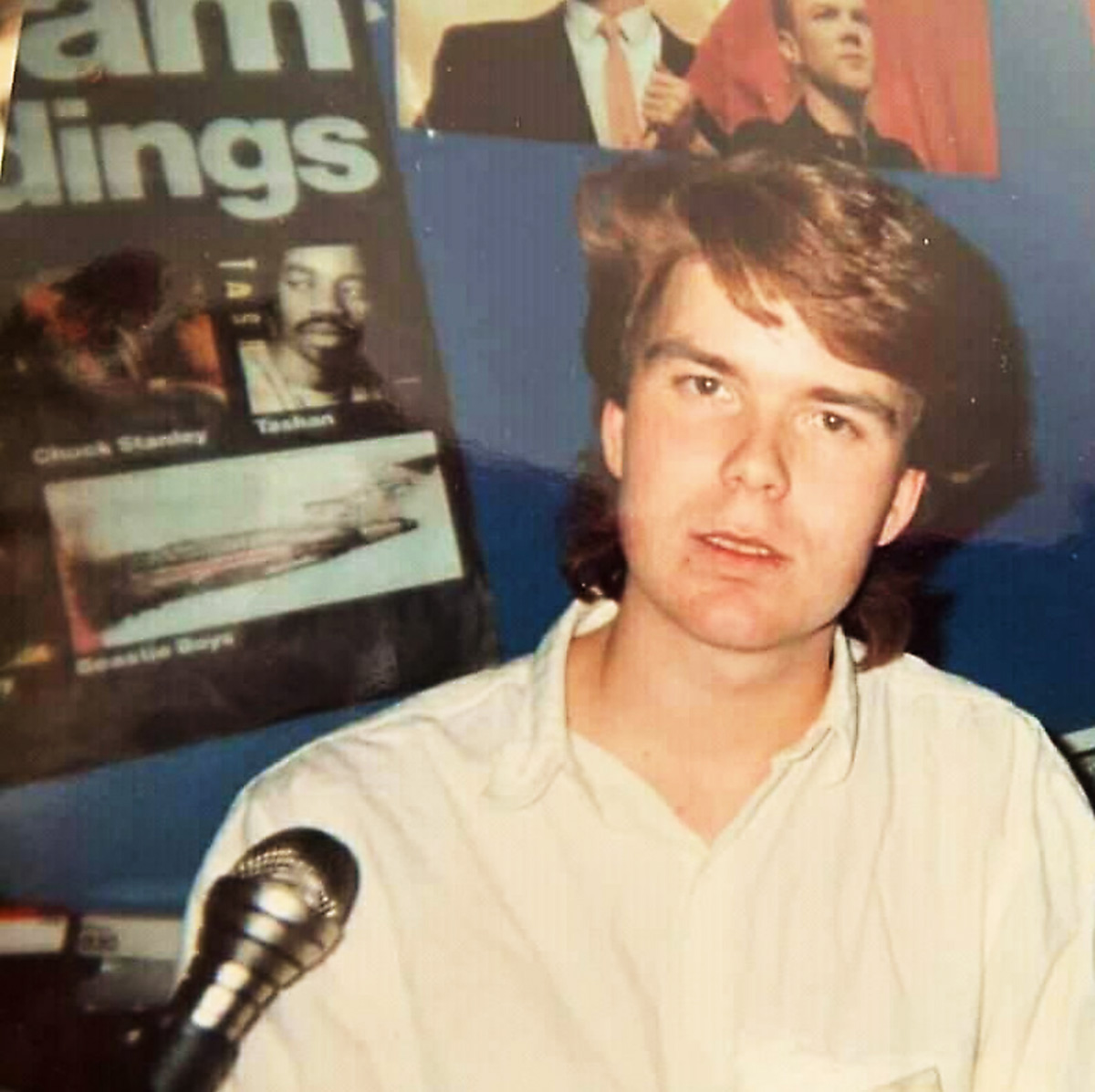 PICTURED: Gerald Harper in the DJ booth circa 1987, the year Changes opened as a teen dance club in Guildford. (submitted photo)

Now 51, Harper works in a cable company’s business department, long after doing time as a bar DJ in his 20s.

“It got to be too much and I enjoyed the party a bit too much, right, so around age 32 or 33, I decided it was time to either straighten up and do something else or be dead by the time I was 40,” Harper revealed.

“The music, I still collect records and probably 90 per cent is stuff we would have played at Bumpers or The Zone. They didn’t play that kind of stuff on the radio back then, and if you didn’t know someone who knew the music or had a cassette, Bumpers was about the only place where you could go to hear the really avant-garde, modern stuff.”

Harper stays connected with Bumpers-era pals and patrons on “Bumpers/The Zone OFFICIAL Party Page,” a private Facebook group of more than 200 members. Memories of Surrey’s teen dance clubs are also often posted to the 11,000-strong “We Grew Up In Surrey BC so we remember” page on Facebook.

“We’re constantly on that (Bumpers/Zone) Facebook group talking about some sort of reunion,” Harper said, “but of course with COVID, that discussion has kind of gone on the back-burner. There’s a pretty dedicated group of people that, one day, will all get back together and have a drink in a bar somewhere on a Friday night. You know, the number of times I walk through the mall and bump into someone you remember from those days, it happens quite often.”

How a zoo in Newton once attracted animal lovers

Evening of Latin dance set for next weekend