The Trans-Canada Highway is open again west of Revelstoke after a 40 hour closure that began sometime early Friday morning.

DriveBC says the highway could be re-opened between 5 to 10 pm. Saturday evening.

Debris clean up and road repairs are ongoing, and detours remain in effect.

The Trans-Canada Highway remains closed west of Revelstoke due to a washout that occurred at Camp Creek overnight on Thursday.

DriveBC says the highway will remain closed until at least Sunday. Engineers are on scene and construction work is ongoing.

Travelers heading to or from Alberta and B.C. are asked to take either Highway 3 or Highway 5. A lengthy detour around the closure is available via Highway 23 and Highway 6, via Shelter Bay, Nakusp, Fauquier and Vernon. Expect delays for the Shelter Bay ferry.

The Trans-Canada Highway will be closed west of Revelstoke until at least Saturday and possibly longer, the Ministry of Transportation reports.

The closure was put in place after debris flows blocked a channel on Camp Creek, sending water and other material onto the highway.

Crews are on scene clearing the debris but the exact length of the closure won’t be known until they’ve had a chance to inspect the Camp Creek bridge, the ministry says.

Travelers heading to or from Alberta and B.C. are asked to take either Highway 3 or Highway 5. A lengthy detour around the closure is available via Highway 23 and Highway 6, via Shelter Bay, Nakusp, Fauquier and Vernon.

DriveBC is reporting a four to five hour wait for the Shelter Bay ferry south of Revelstoke. 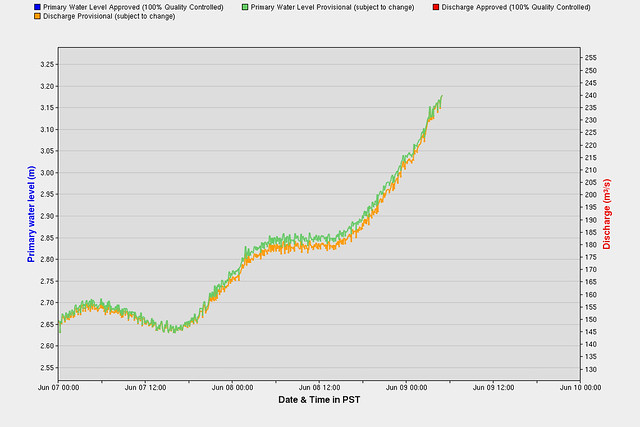 The closure is impacting nearby businesses. Noah Koziboykian, the owner of Noah’s Ark Resort on Camp Creek Road, said the RV resort wasn’t physically impacted by the flooding, but that they were receiving numerous cancellations from guests unable to reach them. He estimates it will cost his business about $2,000.

“It’s the slow season because kids are still in school,” he said. “But there’s no harm for human beings, so that’s good.”

The owners of Griffin Lake Cabins, just arrived on scene when we contacted them. “It is greatly affecting our property,” said the woman who answered the phone before hanging up to go assess the damage.

The Trans-Canada Highway could be closed for up to two days between Revelstoke and Sicamous because of a washout, DriveBC reports.

DriveBC reported the closure shortly before 5 a.m. on Friday, June 9, after a creek overflowed onto the highway 25 kilometres west of Revelstoke.

According to the Revelstoke RCMP, Camp Creek overflowed its banks, washing up onto the bridge over the highway. Highway maintenance contractor EMCON and the Ministry of Transportation are on scene working to re-open the highway.

In a news release, Cpl. Thomas Blakney said the closure is expected to last two days. Motorists are being diverted to Highway 23 South, through Nakusp, then across Highway 6 to Vernon. DriveBC is reporting a three to four sailing wait for the Shelter Bay ferry.

The latest report from DriveBC says a geotech engineer is on site and an assessment is in progress, but there is no estimated time of opening.

Here's what the Trans-Canada Highway looks like west of Revelstoke this morning – Big washout. BC Highway 1 is CLOSED 25…

Posted by BC Transportation and Infrastructure on Friday, June 9, 2017

Cameron Lovett was on his way back from work in Kelowna when he drove past Camp Creek on Thursday at around 9:15 p.m. He said the highway was down to single-lane traffic and there was work crews on scene trying to prevent the creek from flowing onto the highway.

He made it through, but the situation worsened overnight due to heavy rains that hit the area starting Thursday afternoon.

Camp Creek previously washed out the highway in 2012, resulting in a closure of almost two days.

There's lots of truckers stopped in #Revelstoke right now due to a closure of the Trans-Canada Highway that could last two days. These four said they were heading to Vancouver and would probably head back through Alberta rather than attempt a lengthy detour through #Nakusp. Visit Revelstokereview.com for more.