A man stranded by today’s collapse of the White Rock pier has been rescued.

A Cormorant search-and-rescue helicopter arrived at scene just before 3:30 p.m. and transferred the man to the pierhead – to cheers from bystanders – where he was attended to by paramedics before being transferred to hospital.

The pier split in half shortly after 2 p.m. today, leaving one person stranded on the far end.

The storm – with gusts of up to 100 km/h and described by BC Hydro as “one of the most severe storms BC Hydro has experienced in years” – has dealt the 100-year-old structure a vicious beating.

This footage of the #whiterock rescue is crazy! So happy the man is ok but so sad for our poor pier. #bcstorm #whiterockpier pic.twitter.com/d2Bc9H4ZgR

“There’s at least one guy stranded on the far end of the pier. He can’t cross.”

In video taken this afternoon by PAN and shared on our Facebook page, the sailboats that broke loose from their moorings can seen be smashing against the pier.

They took out the handrailing, quickly followed by a chunk of the pier deck that continued to expand in size as the minutes passed.

Emergency crews remain on the scene.

“Every organization we can think of” was contacted for assistance with the rescue, White Rock RCMP Const. Chantal Sears told PAN.

“I believe we reached out to the U.S. as well.

“Hopefully, the rest of (the pier) is structurally sound until (help arrives.)”

“This is a first-time event, ever,” Dean Donnelly of RCM-SAR5 said of the storm’s impact.

Donnelly said some pieces of the pier drifted as far as the city’s namesake, as did as least one of the sailboats. It’s estimated only eight of around 30 vesels that were moored at the pier survived.

@WhiteRockRCMP @IAFF2407 dealing with emergent situation at the pier. Marine drive will be shut down until further notice. pic.twitter.com/4ycs6WKG30

@MMadryga #Whiterock pier is broken. Guy is trapped on other side. Boats slammed into it pic.twitter.com/nzf9wANd1k

The pier continues to take a beating, as the gap increases pic.twitter.com/LXcK96DjHP

Lower Mainland Yacht Club skipper Jason Johnson said the club maintains six sailboats at the end of the pier, “all of which it appears at this point have been destroyed.”

“It’s fortunate that no one was seriously injured out here.”

Johnson said he has “never seen anything like this.”

It’s “a little bit surreal,” he said. “Reminds me a little bit about the power of the ocean.”

The pier was officially opened on Nov. 14, 1914. The battering effect of storms in the decades that followed led to the addition of the breakwater in 1953.

The City of White Rock repaired and replaced damaged piles and cross-braces in April 2013; work that was deemed necessary during a 2010 inspection.

White Rock Mayor Darryl Walker said efforts are underway to secure the structure until it is safe to assess the damage.

“Holy cow, what a mess, what a devastating afternoon,” Walker told PAN just after 4:30 p.m.

Walker said Marine Drive is closed, as is Buena Vista Avenue between Oxford and Foster streets.

The city issued a news release at 3:15 p.m. Thursday advising of the pier’s closure, along with closures of Centennial Park trails and more “due to extreme weather event.”

Away from the water, a White Rock firefighter said a hydro pole near the the corner of Johnston Street and Royal Avenue was at risk of coming down. Police and firefighters were seen diverting traffic heading south.

White Rock firefighters have just told me that leaning power pole, at the corner of Royal and Johnston, could come down at any moment. Entire block of Johnston is cordoned off. @PeaceArchNews @BlackPressMedia #bcstorm pic.twitter.com/izrJpAyl6A

Closer to the water, a rotten egg smell near the corner of Fir Street and Victoria Avenue had residents worried about a gas leak.

Power remained on along much of Marine Drive and restaurants near the pier were packed during happy hour.

Walker said updates will continue to be posted to the city’s website (ow.ly/cKMf30n47Ns) throughout the evening and overnight.

Noting he’s been advised of storm damage to some local homes, Walker said the city’s emergency social service centre is up and running at Centennial Arena for anyone in need of the services.

He implored those curious about the impact to the pier, waterfront and other areas to stay away.

“This was a very, very strong (storm) and continues to be a very strong storm. People are kind of putting themselves in danger” by attempting the visit the sites.

The pier in particular, “we don’t want anybody getting close,” he said.

“Stay away, that’s the message.”

Despite these crazy waves, and winds, I just heard some teens run by yelling “let’s get out on the f***king pier” in White Rock. Needless to say: bad idea. @BlackPressMedia @PeaceArchNews #BCstorm pic.twitter.com/4MT3kKkTzi

But despite waves continuing to crash into the visibly-wobbling pier, at least half a dozen people climbed under the barricade and walked out onto the 100-year-old structure. Some appeared to be nearly at the break in the pier, as it continued to be pummelled by strong winds.

Even after a White Rock RCMP officer headed down to escort people off the pier, a group of teens ran towards it, yelling about how “sick the storm” was.

Despite the damage, Walker was also adamant that the damage does not mean an end for the pier.

“Make no mistake it will be here for another 100 years,” he said.

“We will not lose that pier. Come hell or high water, we’ll make sure we have that pier.” 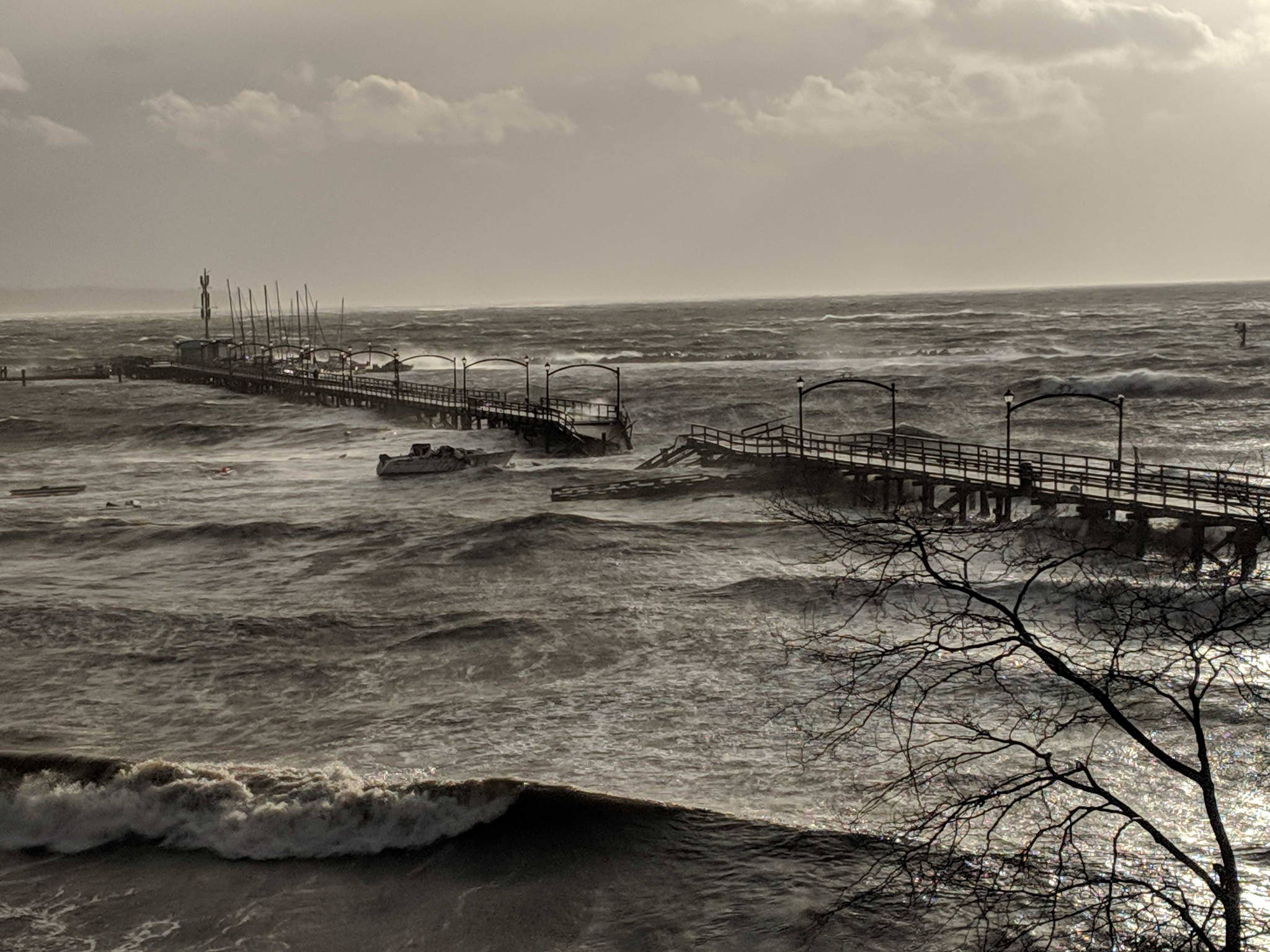 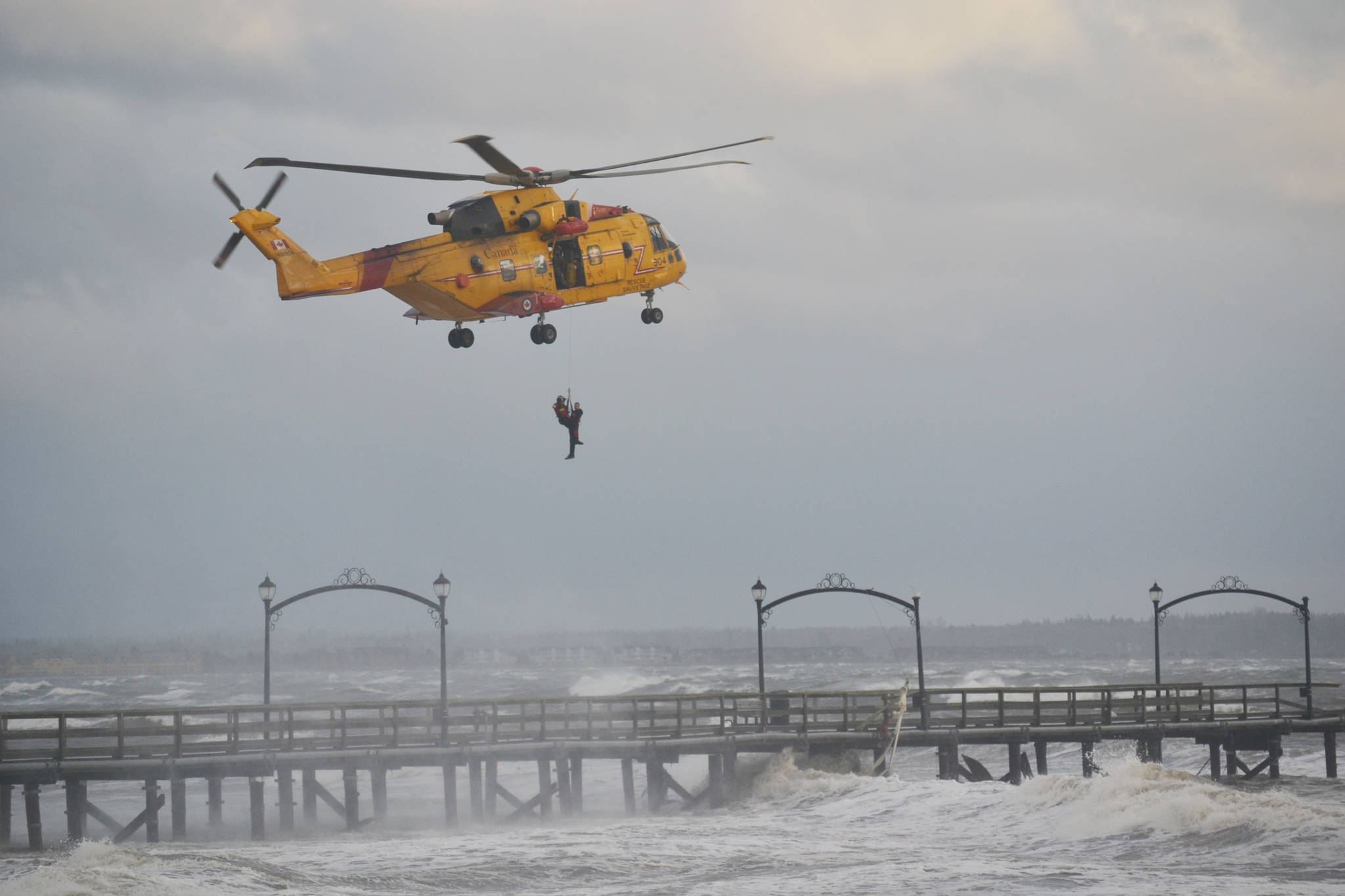 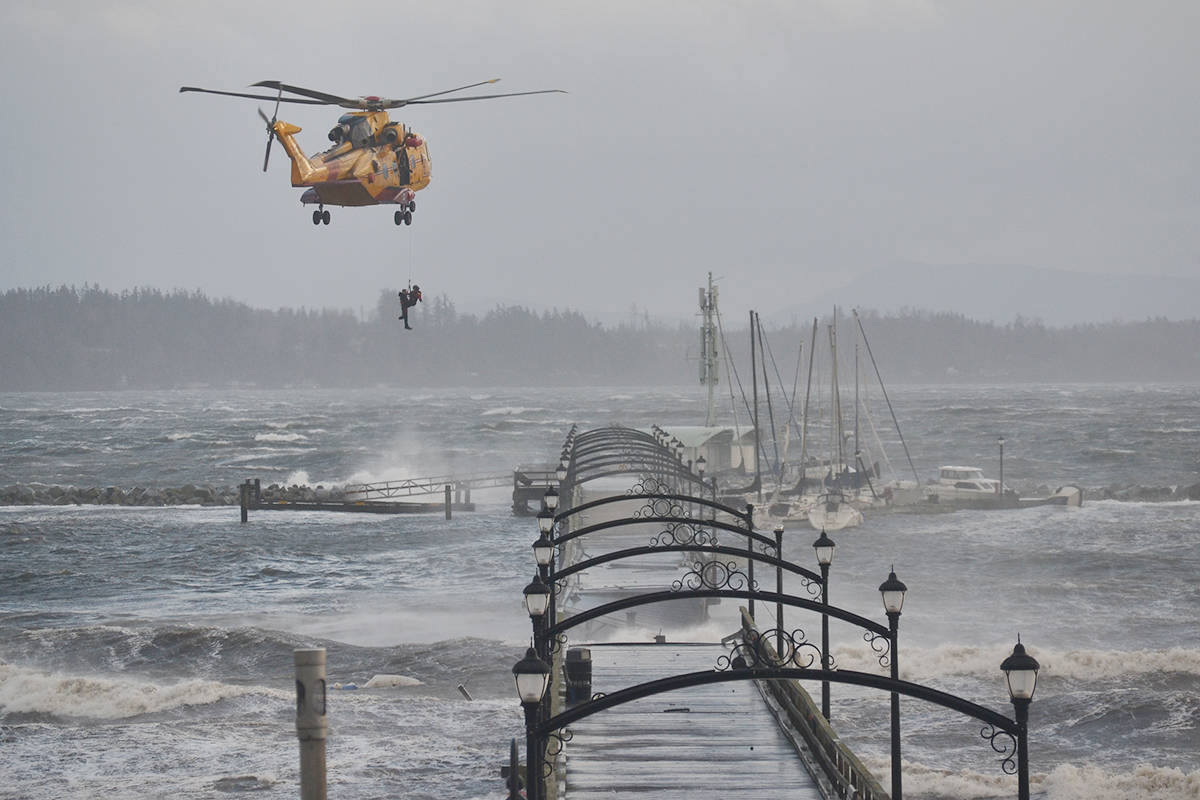 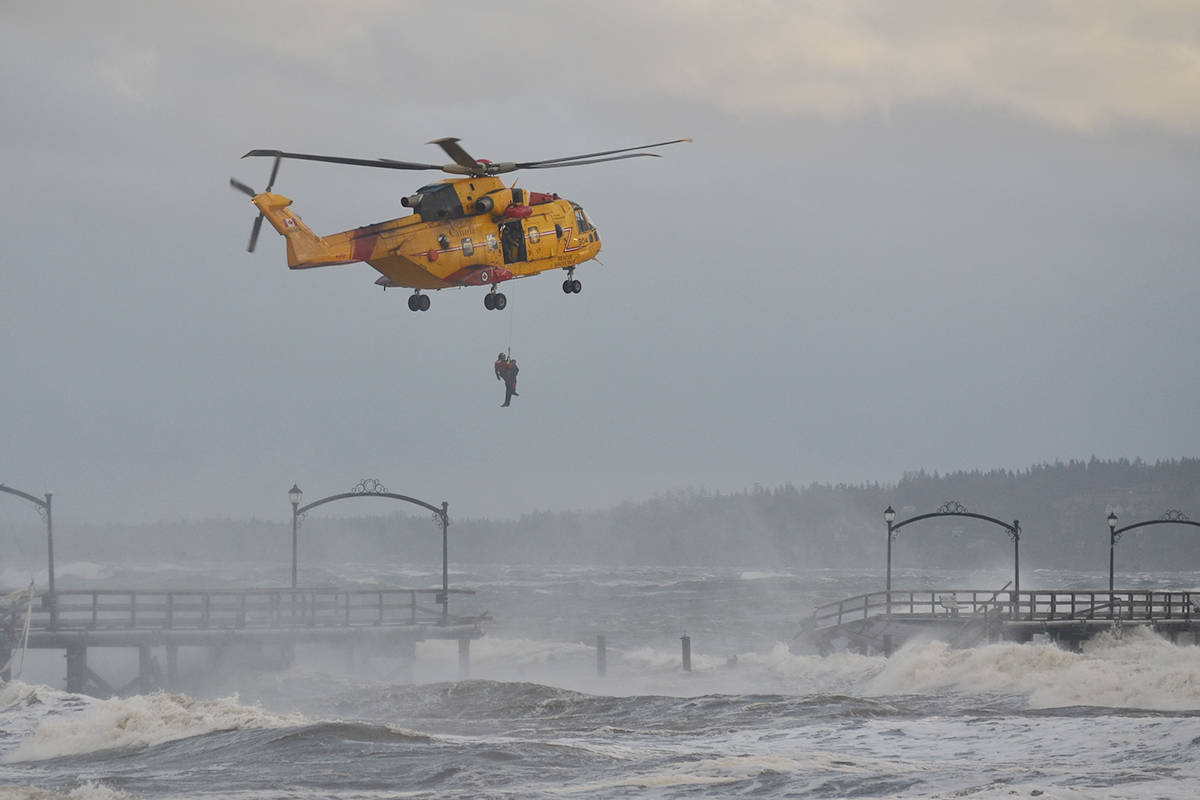 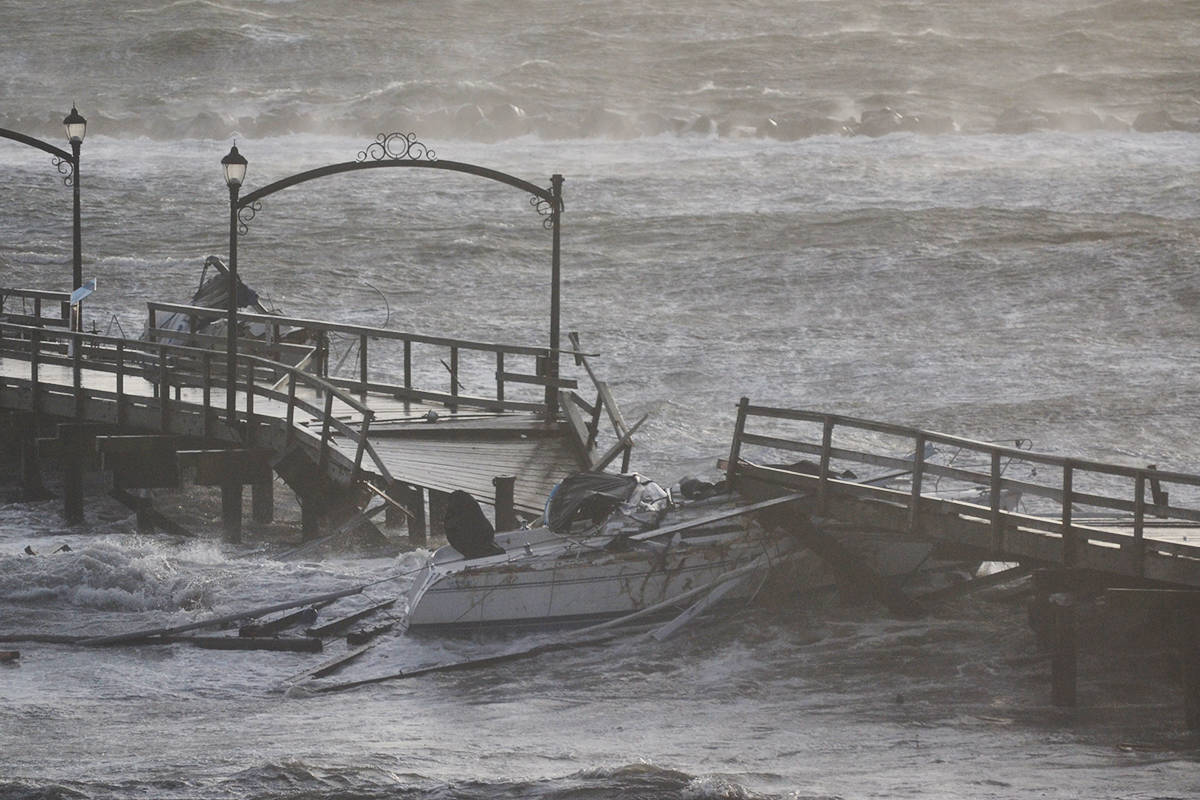 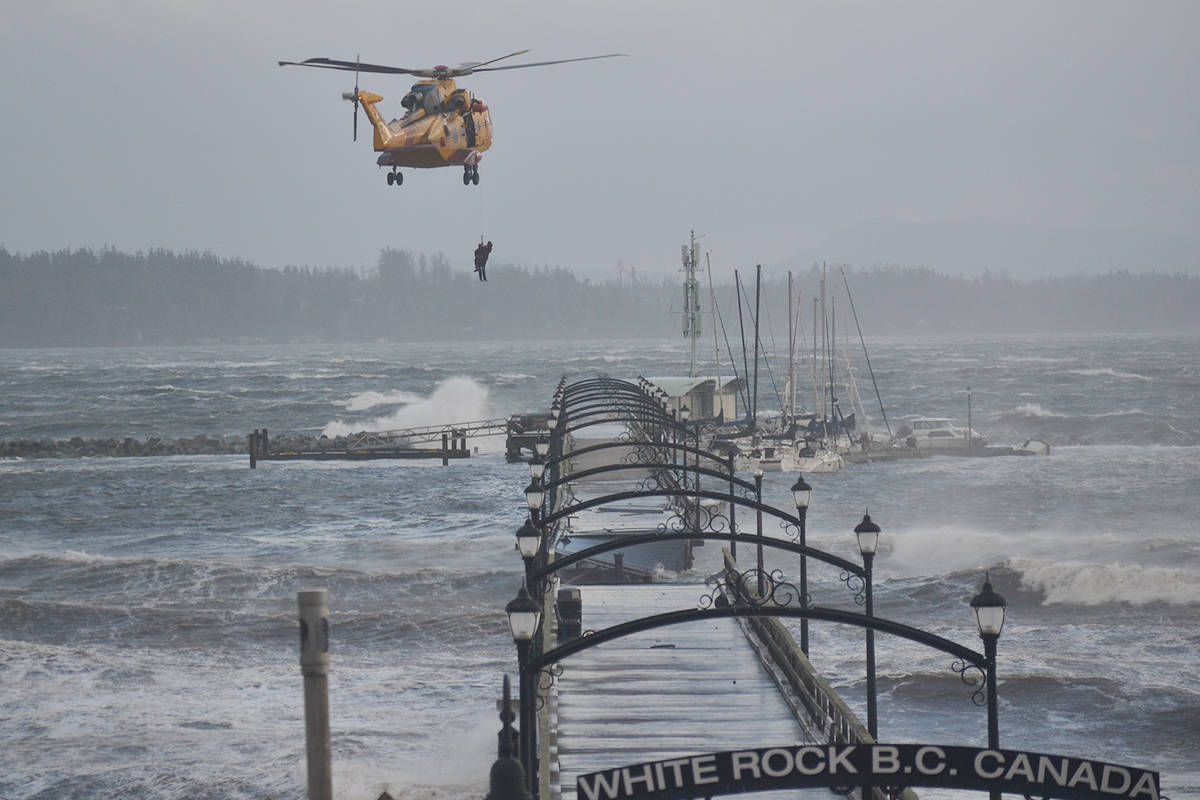 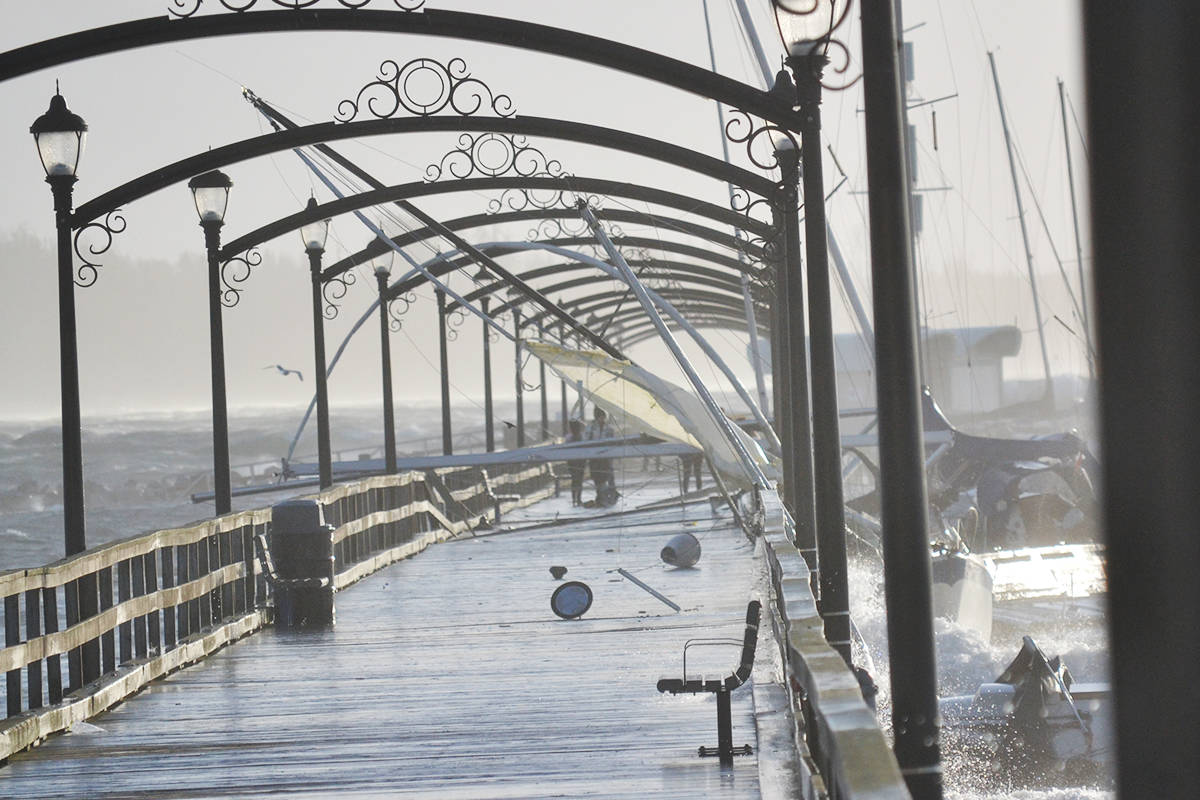 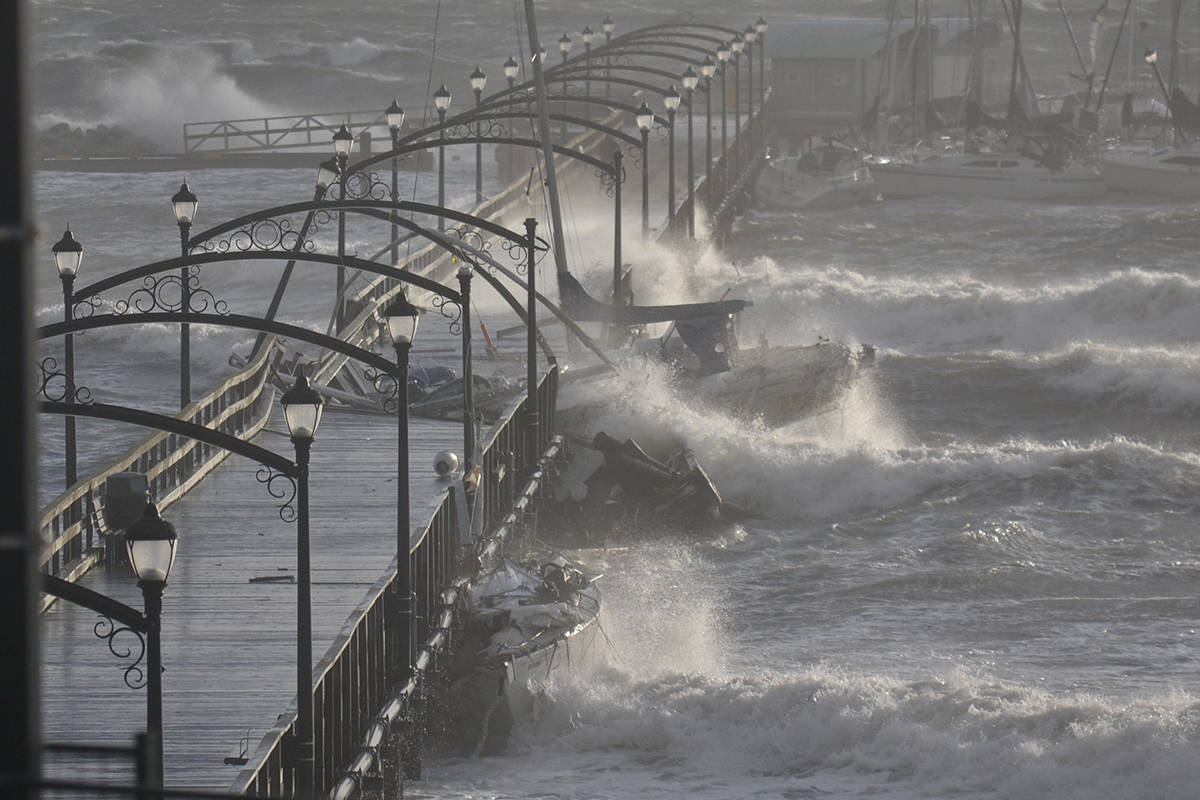 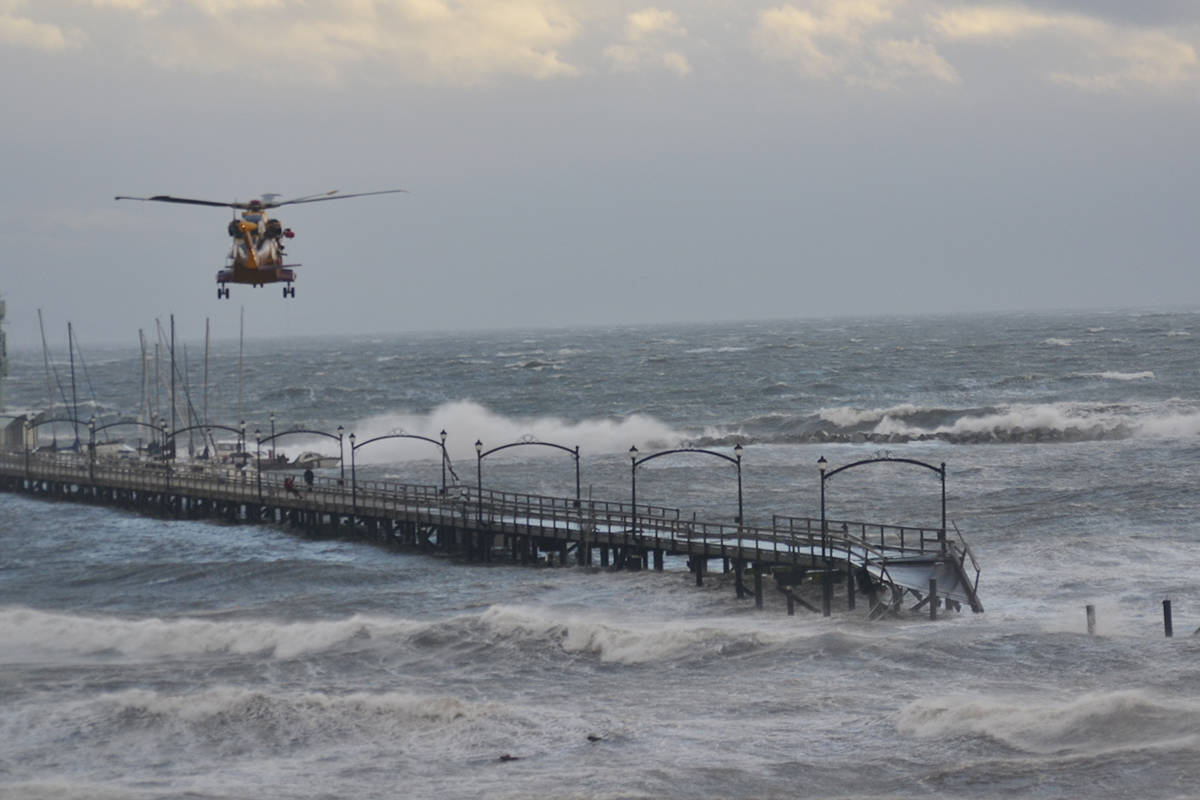 ‘They never asked me what I was doing there, strictly came out with guns, threatening to shoot me’

CRIME STOPPERS: ‘Most wanted’ for Aug. 7