When the B.C. Lions selected him in the eighth round (69th overall) in the 2019 CFL Draft in early May, Jamel Lyles was enjoying a meal at a Boston Pizza restaurant in Fleetwood, where he felt both elation and disappointment.

For the Surrey-raised running back, getting picked by his hometown team was a real thrill.

“It was an exhilarating feeling,” Lyles recalled, “but also I was a bit upset not hearing my name called earlier than expected, you know what I mean, but that’s just more fuel for the fire, right.

“But I’m honestly just happy to get an opportunity, and getting the call from B.C. – oh man, my whole family just lost it and it didn’t even feel real at first, to be honest with you.”

First to call the one-time Lord Tweedsmuir Panthers standout was Geroy Simon, the Lions legend, who now works as the team’s director of Canadian scouting and draft co-ordinator.

“Going to kids camps when I was younger, Geroy was always there, talking – those Punt, Pass & Kick camps the Lions did, remember those?” Lyles said with a smile. “It was just an amazing thing, and I promised him and everyone else that I’d come here to work every single day, and that I wouldn’t take it for granted… I just thanked (Lions management) for the opportunity and told them I’d be one of the best draft picks they’d get this year, that I’d work hard, day in and day out.”

Lyles’ path to a career in the CFL is still in a holding pattern, as the raw rookie hasn’t yet played a regular-season game with the Lions. He didn’t dress for the team’s opening-night loss to Winnipeg at home Saturday (June 15), and won’t fly to Edmonton for Friday night’s fight with the Eskimos, either.

Still watching, he’s waiting for his chance to shine in the brightest spotlight pro football has to offer in Canada.

On Monday (June 17), Lyles practiced hard at the Lions’ training facility in Whalley – across the street from where he used to play baseball. “That’s a crazy connection, too,” he said. “It’s so close, it’s almost like déjà vu being out here.”

On the football field, he’s getting his reps in hopes of getting his first real start with the squad, after showing well in the pre-season.

The gridiron in Whalley isn’t far from Fleetwood, where Lyles grew up and where his “brother,” close friend Jaylen Sandhu, was stabbed to death in December 2014, in the 16300-block of 88th Avenue.

Turns out, much of Lyles’ motivation to make it as a pro football player has much to do with the death of Sandhu, who was 17. His killer, equal his age at the time, was later sentenced to eight years in prison.

• RELATED STORY: Killer gets eight years for stabbing Surrey teen to death, from 2017.

With mothers as best friends and neighbours, Jamel and Jaylen played football together for close to a decade, on minor teams with the North Surrey association.

Today, Lyles said not a day goes by when he doesn’t think of Sandhu.

“He’s still with me on the daily,” Lyles said. “At the end of the day, when I’m down and out and having a hard day and thinking football might not work out, he’s there, he’s in the back of my head saying, ‘You’re not giving up, you’ve been wanting this since you were a little kid at North Surrey.’

“And now, look where I am today, and some of that is because of him, you know what I mean. And I had a close friend group that was always in my ear, too, telling me I had talent and that I was more than just an average player, so they were there too, along with Jaylen.”

For a few years, in junior and during his time with the University of Manitoba Bisons, Lyles often wore one of Jaylen’s shirts when he played, as a reminder of his dead buddy.

“It was a Calvin Klein shirt he used to wear, his favourite, because he was always a big fashion guy,” Lyles explained. “I was really upset when this happened, because one time someone grabbed it and completely ripped it, shredded it, while I was playing. But I still have the shirt hanging in my room, I just can’t wear it no more. And even now I’m trying to pay tribute to what he liked, his style, so I’m slowing getting into that fashion interests,” he added with a laugh. “Even with my hair, my dreads now. That’s where my power comes from, my strength.”

For Lyles, another source of inspiration is his mother, Sharon, who raised him on her own, pretty much.

“None of this would be possible it wasn’t for my mother, and saying I love her is an understatement, you know what I mean,” Lyles said. “She’s gone through so much, without telling me, just so I can play football.”

“Even when I was at university,” he added, “she always made sure I could have a little money to at least support myself, because going to school in Canada is pretty hard with the financial support system, but yeah – she’s someone I really admire, probably my greatest role model. She’s always willing to put others before herself, so I ended up picking up that trait, and I just thank her for everything she’s done for me.”

Kurt Thornton, who coached Lyles at Tweedsmuir, was at BC Place Saturday to take in the Lions game and show support for his former player, who appreciated the gesture.

“He was a tremendous high school football player,” the coach said, “and one of the best things about Jamel is that he loves the training part of football. He put in time in the weight room and he was busting his butt in there. He ended up having a dominant year in his Grade 12 year.”

The six-foot Lyles, who will turn 23 on Aug. 12, has followed a meandering path to pro football, from North Surrey to Cloverdale to Manitoba to Victoria, back to Manitoba, now to Vancouver and, for practices, Whalley. In and around the team’s Surrey hub, he’s become a bit of a tour guide for some of his teammates, many of whom also live nearby.

I am proud and unbelievably grateful to officially say I am apart of the Lions den. I want to thank the entire @BCLions organization for the opportunity to play the game I love; you got yourself a savage. Now the real work starts 🌹
📸:@dzuskind pic.twitter.com/y9W4kkj9bn

On the field, though, it’s all business for #26, who’d favoured #22 until he got to the Lions and learned that jersey number was retired in honour of ’60s-era QB Joe Kapp.

“Coach Clay (DeVone Claybrooks) just tells me to keep working, that it’s going to be a long process, you know what I mean – everybody goes through this, especially as a rookie,” Lyles said. “I just have to keep working on things I can control and get better day by day and not take a day off. The coaches, they really understand my situation and do see my potential, and I’m just blessed to play for my hometown. It’s a great opportunity and I just promise to keep working.” 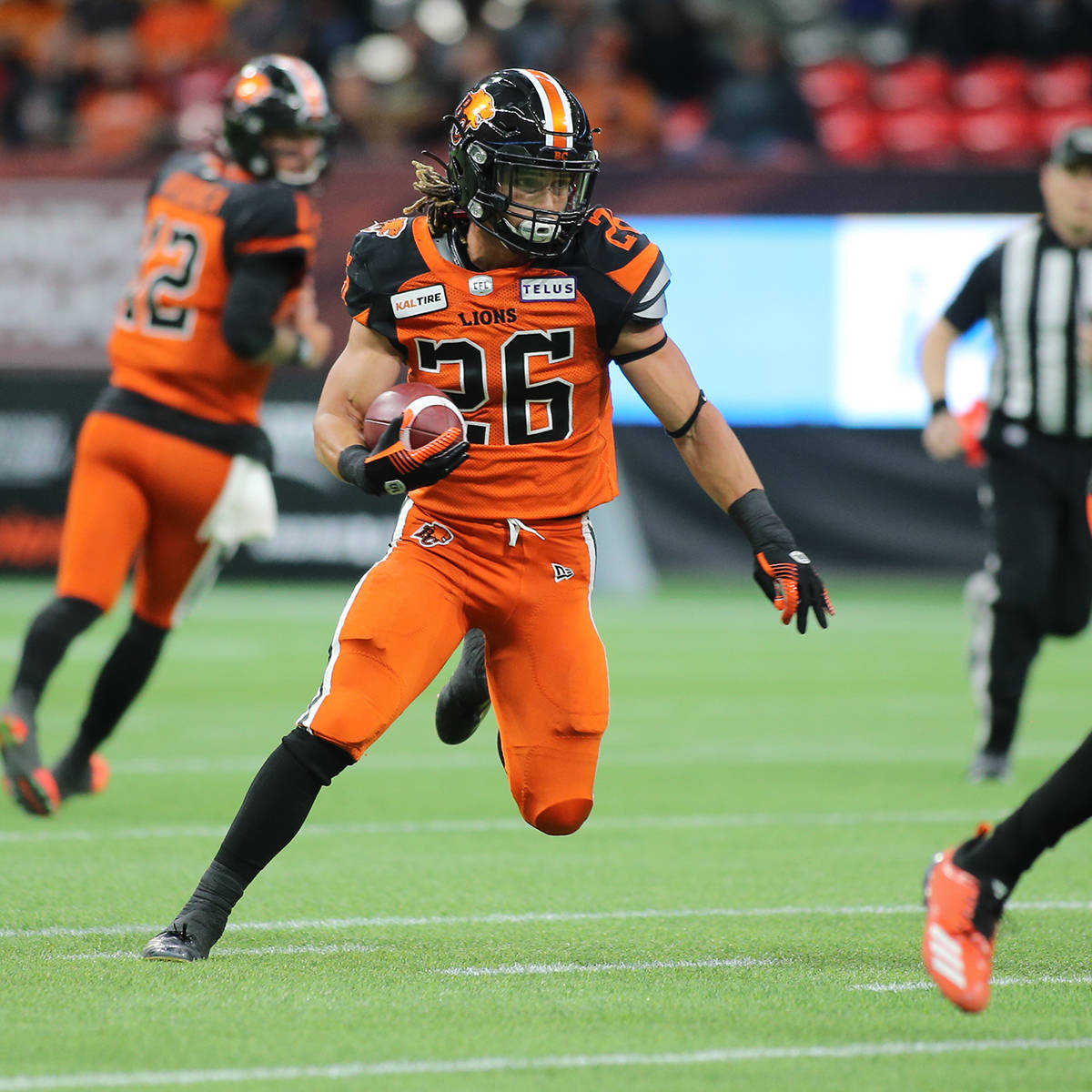 Surrey-raised running back Jamel Lyles in action with BC Lions during a preseason game at BC Place on June 7. (contributed photo: Paul Yates/BC Lions)