They put on a hockey game at Langley Sportsplex on a recent Wednesday night, and it was likely the best game of the year.

Granted, there wasn’t a bodycheck thrown all night. The own-zone play was abysmal. The goals poured in like Vancouver rain. There was even a fake fight halfway through the second period, after which the smiling combatants retreated to their benches, arms raised in mock “Slap Shot” movie style.

In fact, if you looked closely, you could see everyone was smiling. These guys weren’t out there to crash and bang and dominate. They were out there to cruise around, crack jokes and have some fun.

So how the heck was it the best game of the year?

The crowd, for one. In a rink that seats maybe 50 people, there were a couple hundred at least, crammed into every nook and cranny, and they were loud all night.

Then there was the on-ice talent. It was a who’s-who of local junior players – guys who normally circulate in domains like the WHL, BCHL, NCAA and the CIS. And when one of them opted to break away from the game’s all-star flavour and turn on the jets, or when a couple of them conspired for a little back-and-forth wizardry, it was something to behold.

But there was one guy in particular – a defenseman – who you just couldn’t help but notice. He played the game loosey goosey like everyone else, but every now and then he’d just CRANK one. We’re not talking a mere slapshot here, we’re talking a net-seeking missile that no goalie should ever have to face.

He’d eventually score a couple with that missile and maybe more – the final score was 15-15, or something like that, so who knows – but more important was the guy himself.

His name is Cole Bevan. He was born in Richmond and now lives in Cloverdale. He’s been a two-sport athlete most of his life, and excelled at both. Most recently, he was playing lacrosse with the New West Salmonbellies. The year prior, he was on the ice with the BCHL’s Coquitlam Express and Swift Current Broncos of the WHL.

PICTURED: Donations at the game were collected for the Bevan family. (Photo: Gord Goble)

And soon, he’d realize just how many friends he has.

“We have a core group of nine or 10 guys that have hung out since we were six or seven years old. We decided as a group to make this a better situation, and we had two ideas.”

In early December, the first of those ideas became reality when Bevan’s closest friends – many of them hockey and lacrosse players themselves – got together and buzzed their heads to match the noggin of their buddy. The Instagram pic of the clean-cut bunch is still up there, complete with a comment from Bevan himself: “Well, the good news is everyone had a normal shaped head.”

And that’s the way he’s dealing with it – a little humour, when possible, and a eff-cancer fighting spirit. On Nov. 22, the 20-year-old tweeted, “So 2016 has really decided to see what I am made of! I guess the bigger the challenge, the more ass I get to kick. So let’s get it.”

And on Dec. 21 in Langley, Cole Bevan’s buddies were at it again.

It was called the “Let’s Kick Cancer for Cole” hockey game, and it was devised and arranged by his closest accomplices. Admission was by donation. Ice time was donated by Bud and Tracy Pope at Sportsplex. The jerseys were donated by the UBC Thunderbirds.

By the end of the night, they’d not only put together the best game of the year, but also raised a cool $9,200.

“What they’ve done, right from when they wanted to shave their heads, they’re doing it for him,” said Cole’s mom Cindy as she watched yet another cannonading drive fly from the stick of her son.

“He was so looking forward to coming out and just playing hockey and seeing all these guys he hasn’t seen in a long time. Their support has been amazing. It’s kept him positive and enjoying things, and ignoring the bad stuff he’s going through.”

PICTURED: The scene in the dressing room. (Photo: Gord Goble)

The whole thing has made Cindy Bevan a believer in the power of the sporting community.

“I think that anyone who’s been involved in hockey knows there’s an extended family there that wants to help,” she said. “They really do. And I think it’s evident here. He has his hockey and his lacrosse buddies here, and the hockey and lacrosse families, too. And it’s the same way. When you’re in sports like that, you’ve got a lot of support.

She talks about the head-shaving thing, on one hand loving what they did for Cole, but on the other feeling a twinge of guilt.

“I feel bad for all the parents who are going to have Christmas pictures with their kids and their shaved heads,” she said with a laugh.

And there’s more support beyond the hockey game. A GoFundMe campaign has already raised more than $16,600 to help the Bevan family with the many out-of-pocket expenses they’ll undoubtedly incur.

“But it’s really hard at times to accept it. There are so many deserving families out there, and so many people who need so many things. To get this sort of support for him is humbling.”

Expectedly a bit nervous in the dressing room before the game, Cole Bevan was clearly enjoying the night a few shifts in, and by the midway point looked as upbeat as anyone on the ice.

“He’s doing good,” his mom noted. “He’s been very positive. His whole attitude is, ‘Let’s just get on with it’ and get the treatment and beat this. There is no doubt in his mind – he is going to beat it. That’s how he feels, and that’s important.”

To donate, head to Gofundme.com/colebevan.

A poster for the benefit game: 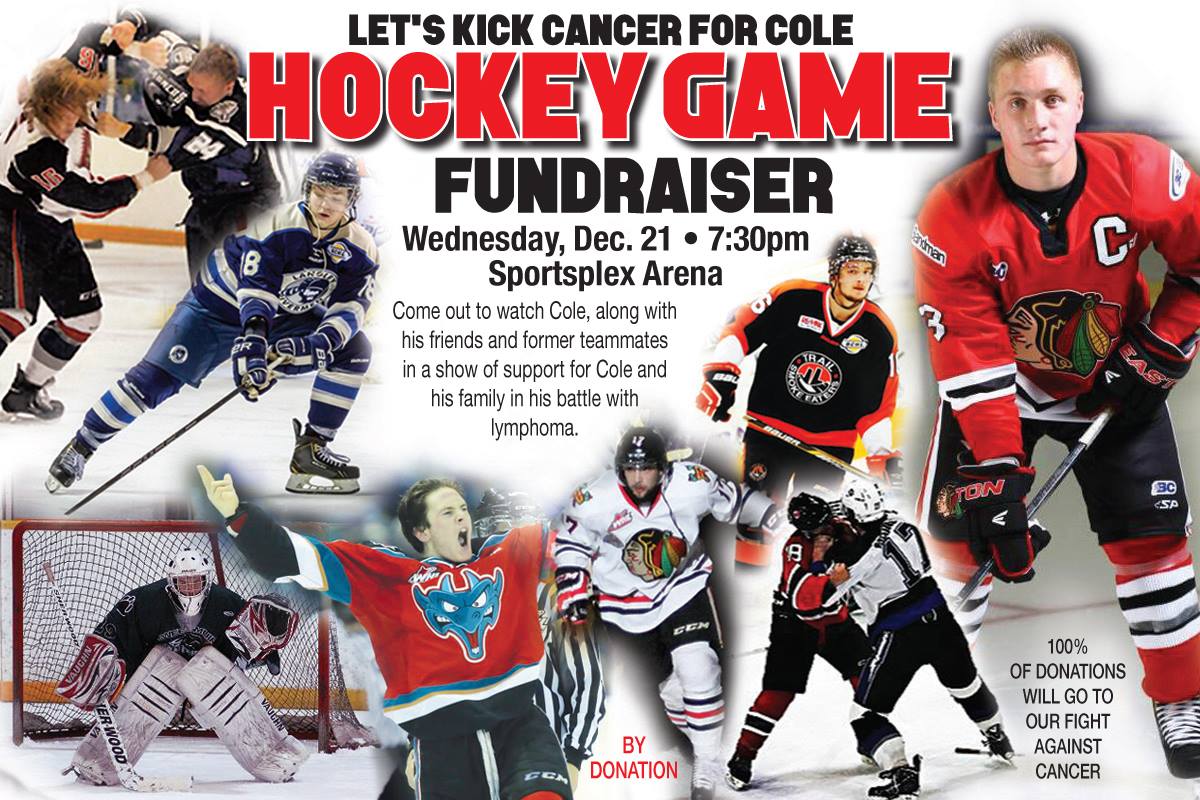 2016: Another year that saw Sidney Crosby rule the sport of hockey

YEAR IN REVIEW: Surrey’s winning athletes and teams of 2016 – and some losers, too