The Mandrake house in Surrey seemed like a pretty magical place to those who lived in that area of Whalley, at Grosvenor Road and Kindersley Drive.

After all, the repurposed corner store was home to Mandrake the Magician and his family, and the Italian-Canadian patriarch was known to entertain visitors with a trick or two.

Born in Washington State and raised in New Westminster, Leon Mandrake was a Surrey-area celebrity from the 1950s until his death, decades later.

In 1985 he performed his last ever show, at a festival in Victoria, capping 62 years in show business as a magician, mentalist, illusionist, escapologist, ventriloquist and stunt performer.

Artifacts from Mandrake’s story-filled career are collected for a new Community Treasures exhibit at Cloverdale’s Museum of Surrey, in a winter/spring show assembled with the help of his son, Lon Mandrake, a North Delta resident.

Lon remembers moving into the Surrey house in 1957, at a time when his father was already famous, thanks to television appearances and a comic strip that borrowed his name and likeness.

“There were some good memories in that house,” he said. “When we moved in, Grosvenor was just a dirt road – dirt and gravel. And there were wild pheasants flying across the road when we drove down there. Things have changed a lot in that area, for sure. My dad had a lot of celebrities who’d pop in to say hi or stay a night – people who’d be performing at the Cave in Vancouver, places like that.”

Later, the people who bought the house used to invite the Mandrakes back for visits, Lon remembered. “In fact, I did a magic show for them and their friends after they moved in.”

PICTURED: In August 2016, flames leap from the former Surrey home of Mandrake the Magician, at Grosvenor Road and Kindersley Drive. (File photo)

In the heat of August 2016, more than two decades after the Mandrakes vacated in 1994, the abandoned house burned to the ground, ending any chance of city hall giving the structure heritage-protection status, as had been considered.

• RELATED STORY, from 2016: Home of Mandrake destroyed by fire.

“People in the area sure knew of him and our house,” Lon said, “because my dad used to do a lot of school shows there in Surrey. When Surrey Place Mall opened, he did a blindfolded drive around the area there, in the ’70s. He did that kind of drive quite often.”

Memories of such stunts and adventures figure in Mandrake the Magician, a just-released documentary made by the magician’s granddaughter, Käla Mandrake, who is Lon’s niece. The Manhattan resident’s hour-long, dream-like film, posted to YouTube in November, is a personal journey into the old world of Vaudeville, and documents the years when the filmmaker and her family would visit.

“As a child, my family would fly from New York to Surrey to spend the summer there,” Käla recalled. “He was a tall, charming, elusive man who everyone seemed to revere. Visitors of all ages would knock on the door of their old Surrey house just to meet him and ask for his autograph. I found him mysterious because he seemed to spend a lot of alone time reading, writing, or playing solitaire. But he would occasionally put on a show for the family with his ventriloquial dolls. Although I was always very curious about his career, he never told me about his past.”

The documentary features Mandrake’s autobiographical writings, fictional interpretations and factual stories from family members, and reveals a few “ghosts of the past,” as Käla tells it.

“The film was initially created as a personal investigation into who my grandfather was,” the filmmaker explained. “But over time it evolved as my perspective shifted and changed. There was a world of material to research and explore, and I always wished for more. Paradoxically, it seemed the more information I gathered about him, the more unknowable he became. But I felt closer to him in a strange way. I think it was the journey in discovering who he was that made me understand him more profoundly. It seems the main purpose of his silence and secrecy was to ignite the imagination. He probably would have enjoyed seeing my attempt to figure out his mysteries.” 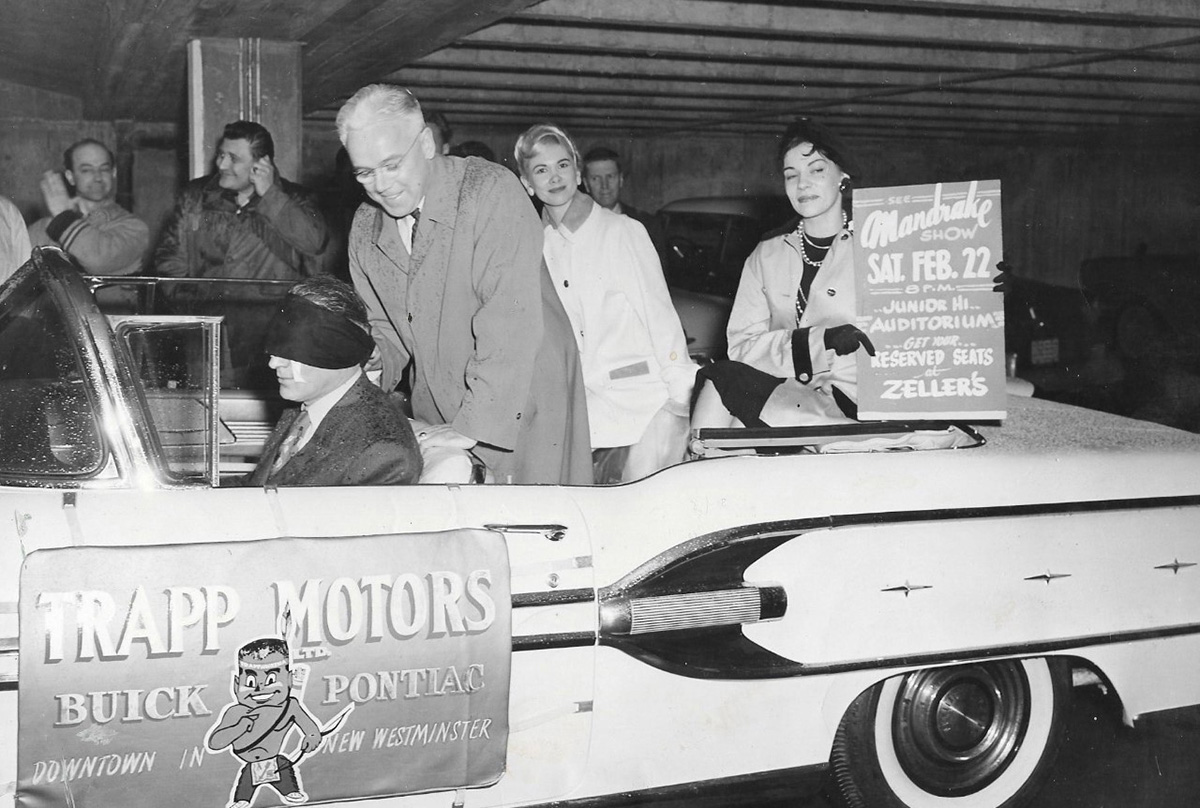 PICTURED: Photo from 1958 shows a blindfolded Leon Mandrake behind the wheel of a car in New Westminster, in a promo stunt of the magician’s. (submitted photo)

• READ MORE: Mandrake the Magician revealed in new exhibition at the Museum of Surrey.

“The exhibit has been in the works for two or three months, since it was first discussed,” said Lon. “I have quite a collection of things that belonged to my father, my family’s stuff – old costumes, some of the old magic kits and props. A few of those things have gone to magicians museums, but I still have a lot of it in storage.

“Costumes include the tails my dad wore in the ’30s and ’40s, the kind they’d wear in the opera house, so people will see the red tails he wore. Those were pretty unique, because not many magicians wore the red tails.… I have a crystal ball, some publicity materials, magic kits, a Mandrake the Magician game, a record of the radio shows, all kinds of stuff.”

A retired teacher, Lon performed his own magic shows right up until COVID-19 was declared a pandemic nearly a year ago. “We did a big dinner show at the casino in Coquitlam, and I’ve done shows at UBC and a lot of corporate events,” Lon said. “We’re hoping to do all that again.

“At the museum,” he continued, “I hope to get out there myself and do some socially-distanced magic tricks. It can’t be a scheduled event, of course, because we can’t have crowds right now, but maybe I could be there and do a couple tricks for whoever’s there. I love to keep my hand in it, performing.”

PICTURED: Vacant lot where the Mandrake family home once stood in Surrey, at the corner of Grosvenor Road and Kindersley Drive. (photo: Google Maps)

“He would have been 82 had he made it until April that year,” Lon noted. “Emphysema was the main thing that got him. You know, back in the ’40s and ’50s, a lot of the magicians performed with cigarettes, and when he performed in nightclubs, everybody smoked. He became a heavy smoker, you know, and the funny thing back in those days, it seemed everyone smoked, and doctors recommended it.”

Lon said his mother, Louise, known as Velvet when she toured and performed with Leon for decades, died two years ago at a Surrey care home at age 94.

CRIME STOPPERS: ‘Most wanted’ for the week of Feb. 28

1 person in custody after fight outside Surrey residence