For Jeffrey Jung, the iconic Rickshaw sign in Surrey is a reminder of his family’s busy days in the restaurant business.

Western-style Chinese food is no longer served on the ground floor of the three-storey building on the east side of King George Boulevard, where the crimson landmark stands in the lot where hungry customers once parked.

The sign, added to Surrey’s Heritage Register in 2016, has seen better days since its unveiling, circa 1963. It’s no longer lit with neon lights, and keeping the metal clean and rust-free is among Jung’s duties as caretaker of the family-owned Rickshaw Plaza building.

“It needs some electrical work, so it can’t be lit up,” Jung said. “But we try to keep it clean, and I just had a cleaner there this week. Unfortunately there’s a tree right next to it, and there’s a lot of organic matter that hits the sign. We have to get it cleaned every couple of years, and right now it’s looking pretty clean.”

Who ate at the Rickshaw in Surrey?
Here's a look back at the landmark restaurant and its iconic sign, added to the city's Heritage Register five years ago. STORY: https://t.co/ODh6dgTw5h@dtsurreybia @DowntownSurrey @SBofT #SurreyBC @HeritageSurrey pic.twitter.com/hXBRQdvyZ6

Jung’s parents, Tommy and Carol, co-owned and operated the Rickshaw from the late 1950s until 1994. During those decades, the restaurant was a magnet for meetings, banquets, family dinners and special occasions of all kinds.

In his teen and university years, Jung worked in the kitchen, bused tables, made drinks and took orders on the phone.

“It was my summer job,” he said. “It was fun seeing a baseball team come in from Whalley Little League, and they had the Rickshaw jerseys on, after their games. And RCMP members came in, but sometimes they had to go to a call or whatever, so my dad would say, ‘OK, we’ll keep your meal hot,’ for when they came back later, because he knew them all – they were regulars.” 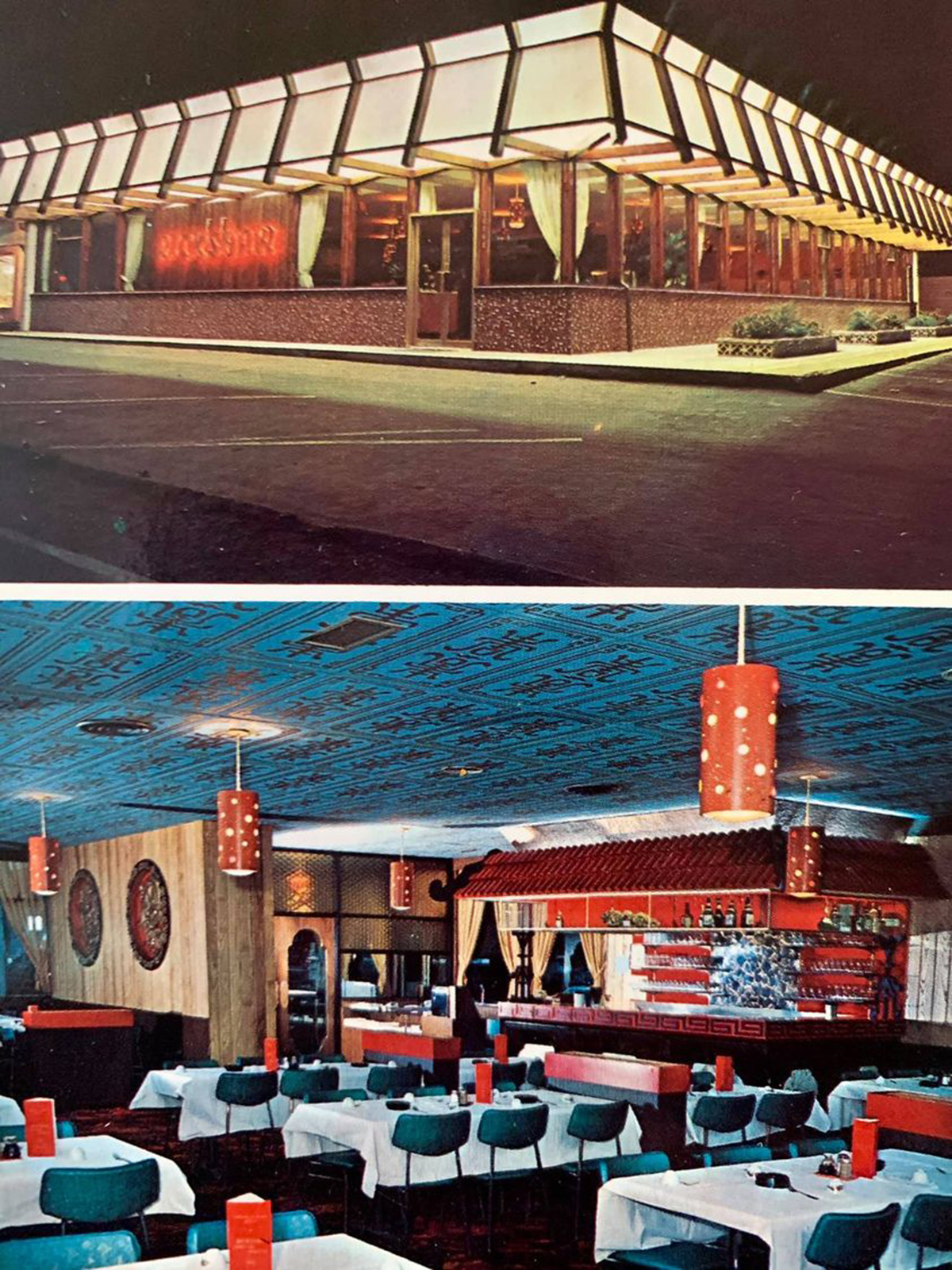 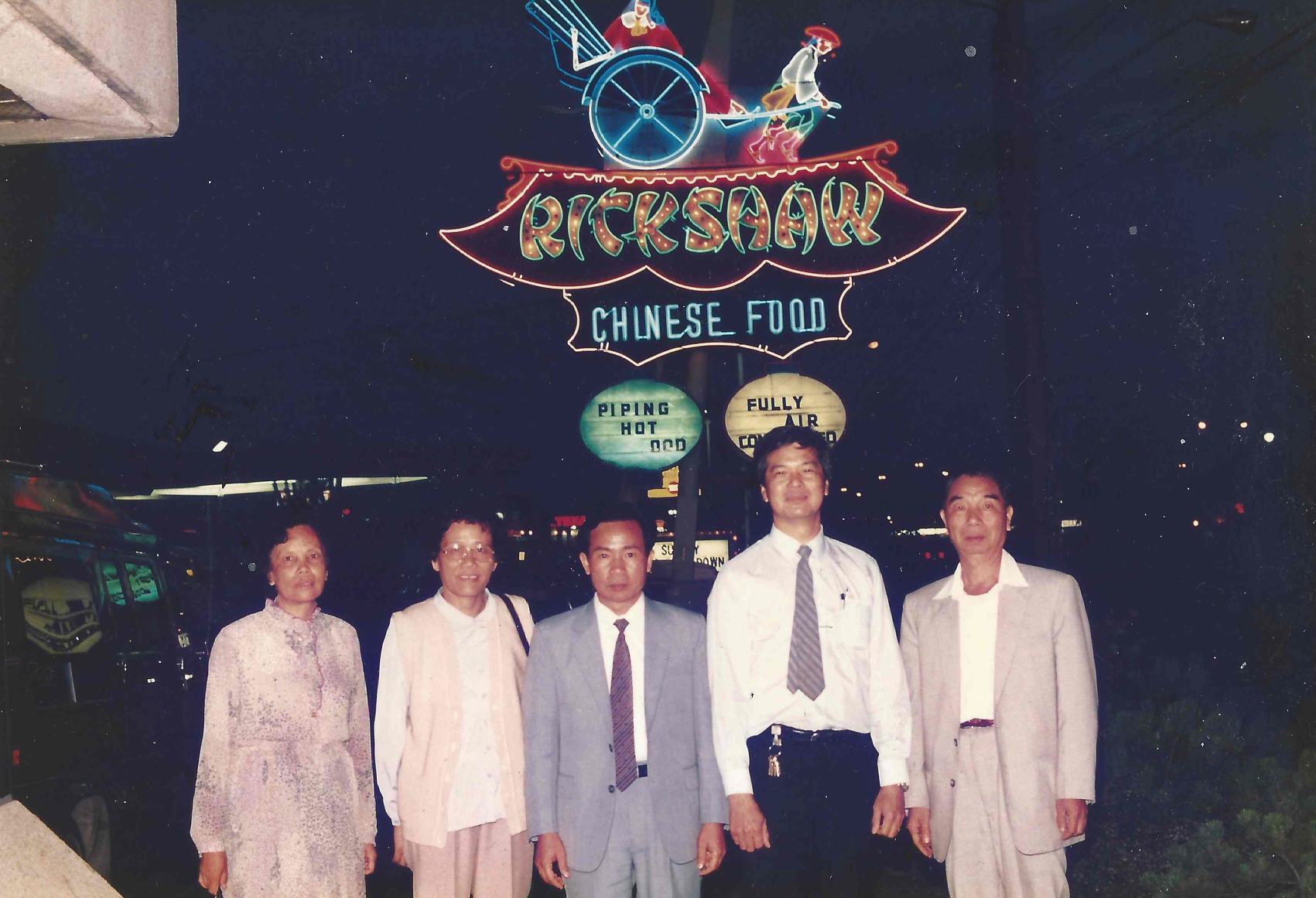 The Surrey location, once part of a Lower Mainland chain that involved several owners, was Tommy’s turf.

“He’s almost 80 now – he’s still around, and so is my mom,” Jung reported. “Dad, he’s very much an entrepreneur and has his stories. He’s a great storyteller and I think that’s why customers liked him. He’d remember people’s names and their family members from Alberta or wherever, and they probably appreciated that.”

Now an accountant, Jung is often told stories about the Rickshaw by people who once dined there.

“Just being around the building, people always ask me about the restaurant days. There was a Shaw technician, I think, and he said his daughter or something used to work at the Rickshaw and recognized the (Jung) name, and I told him that I think I worked with them, too. So there’s that connection with people, that sense of community of that era.”

After the Jung family sold the Rickshaw in the mid-1990s, the neon sign went dark for a time. A new owner did some rewiring to light it again in 2005, but it’s been out of commission since at least 2013, when a smaller version of the restaurant moved directly across the street. There, a chef still makes Almond Chicken and Chow Mein for yet another owner.

“We’ve had people tell us that it’s not the same, because there’s a certain generation that remembers the Rickshaw from the old days, the experience that it was,” Jung said. 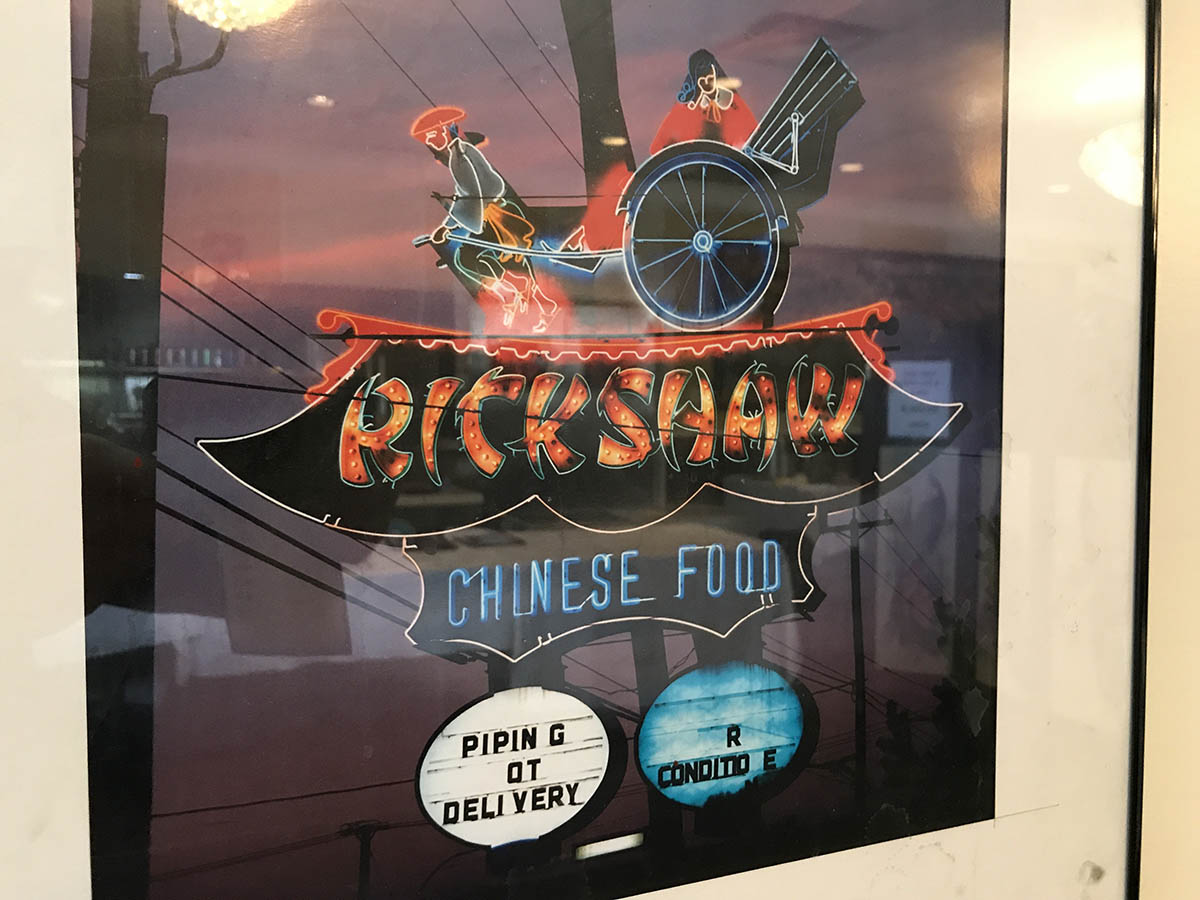 PICTURED: The lit Rickshaw sign is shown in a photo on the wall at the current Rickshaw restaurant, at 10505 King George Boulevard. (Photo: Tom Zillich)

Meantime, the upper floors of Rickshaw Plaza building have seen a number of businesses since it was built in the early 1980s, as a replacement for the original, single-storey Rickshaw restaurant.

“My dad decided to expand and build another building, a bigger one,” Jung recalled. “He built it when interest rates were pretty steep. For me, as a kid, to see the building process, that was interesting and I learned a lot, and they shut down the restaurant for one year.”

Today, in the space where the restaurant once cooked, the One Central sales centre touts condos in what’s billed as “Surrey’s tallest residential tower,” to be built elsewhere in the area.

“For me,” Jung said, “I think the building is part of my dad’s legacy there, so it’s not going anywhere. He’s always hoped for big things in Surrey, and that the city would grow faster. It’s always fun driving him out here, for him to have a look around the neighbourhood, to see how it’s all changed and also just to hear his stories.”

How a zoo in Newton once attracted animal lovers

Tesla to take over Jonker Nissan site on Langley Bypass

SURREY NOW & THEN: Bumpers and other teen dance clubs were big in the 1980s