The Peace Arch monument is set to turn 100, but don’t expect a big birthday party this year.

All celebrations are on hold for now, due to the ongoing COVID-19 pandemic.

Also delayed is the planned opening of a time capsule that includes things from 1921, when the Peace Arch was dedicated as the world’s first such cross-border structure, on Sept. 6 that year.

“The sad thing with the time capsule is that people think the contents may have been destroyed, and that’s because the Peace Arch has leaked,” said Christina Winkler, president and founder of International Peace Arch Association (IPAA).

Two new time capsules are in the works, she noted.

A Blaine resident, Winkler said she has adored the Peace Arch since she was a kid making cross-border trips with her family.

“My dad was from England and my mom, Vancouver, and they came to America and raised their babies,” Winkler explained. “I was three days old when I crossed for the first time. When my parents drove across the border to take us to grandma’s house, they never failed to tell us how important the Peace Arch was. They always told us that we were the luckiest people in the world.”

Later in life, Winkler got involved planning the 75th anniversary of the Peace Arch, in 1996.

“What really fascinated me was all this beautiful history of it, like opening a treasure trove of facts, and yet my whole life I never needed to know any of them,” Winkler said. “But yet once I learned about the history, about the monument, it made me think, ‘Why are we not sharing this story every day?’”

The Peace Arch stands as a representation of “the lasting friendship between Canada and the United States,” according to a heritage post on surrey.ca. In 1914, Samuel Hill, famed Washington State lawyer, financier, road builder and humanitarian, organized an international fundraising drive to build the arch. Internationally known architect H.W. Corbett of London, England, donated his talents to design the monument. Construction of the concrete and reinforced steel arch, considered to be one of North America’s first earthquake-resistant structures, began under an international force of volunteers in 1920.

In non-pandemic times, more than 500,000 visitors annually tour the site of the 67-foot monument.

Of note, construction of the Peace Arch began just as the Spanish Flu pandemic was coming to an end.

“Here we are in the same place now,” Winkler said with a sigh. “Our founders actually started work on it 1914, announced it in 1915 and then from there, World War One had started, and Canada was immediately involved, then the United States in 1917.

“I think the Peace Arch deserves more than just having a political moment in September, and we deserve better,” Winkler added. “If they can go through a world war and a pandemic and give us this Peace Arch, we have to work on something special to celebrate it.” 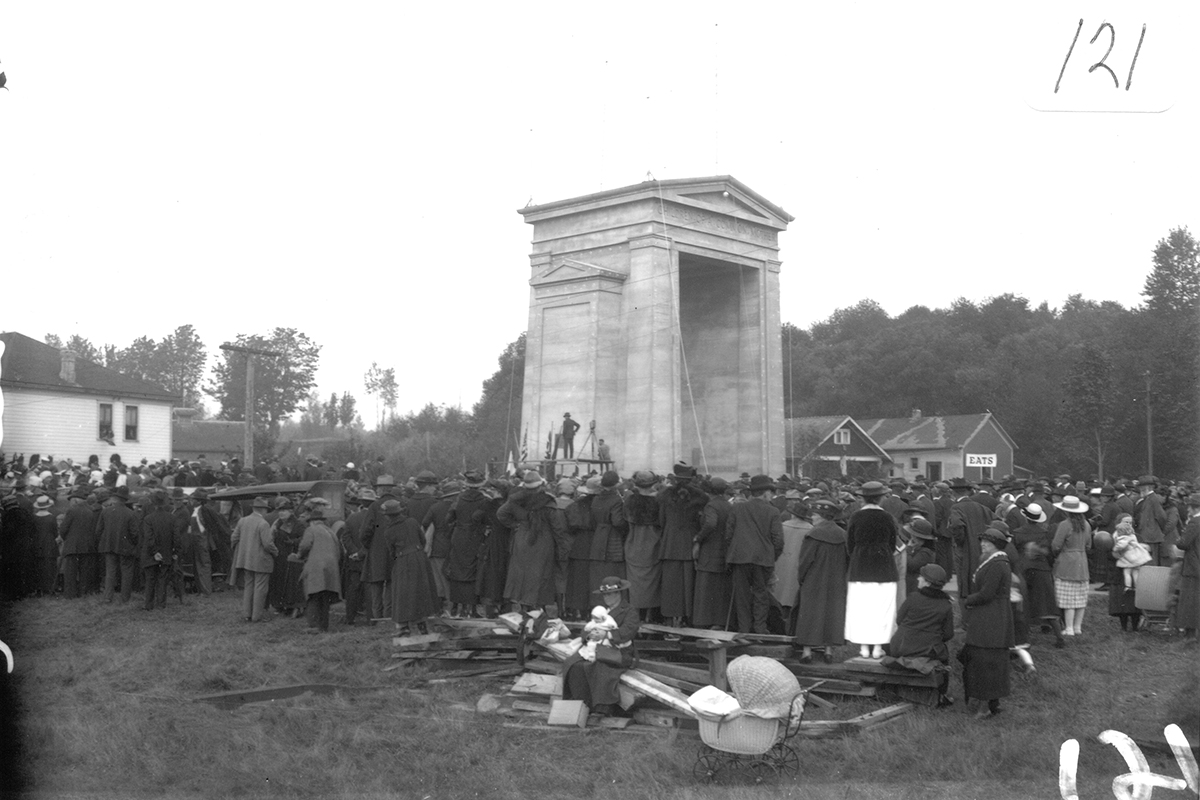 PICTURED: A dedication ceremony held for the Peace Arch in 1921, in a photo taken by Vancouver-based photographer Walter Calder. (Photo: White Rock Museum and Archives)

Later this spring, Barb Hynek will present a closer look at the Peace Arch during British Columbia Historical Federation’s 2021 conference, a virtual gathering from June 3-5.

Last year, International Peace Arch Association lobbied to have postal authorities on both sides of the border create stamps to recognize the centennial of the arch.

In August, the monument was wrapped in what appeared to be a white plastic cover while it was vapour-blasted, primed, painted and restored.

With the nine-acre Peace Arch Park on Canadian side of the border currently closed since last June, and the American park open, Winkler wonders how long 100th-anniversary celebrations for the monument will be delayed. It’s a complex situation involving two countries with two different sets of rules.

“With the park on the B.C. side closed, we can’t really have a celebration. It wouldn’t be right,” Winkler said.

“What we’re doing is adjusting our timeline,” she added. “We’ll start to put up banners in the park this summer, so we’re kind of looking at this September now being the kickoff and then whatever we do would run until the end of 2022, just a little delay. Originally, our centennial season would have started last September 6th and run through to the end of 2021.”

The two new time capsules will be placed in the park as part of the commemorations in 2022, Winkler said.

“We are inviting individuals and families to support the centennial program by donating $1 U.S. for each year ($100 U.S. Funds) the Peace Arch has stood on our shared boundary,” she said. “These funds will help fund centennial activities. Each $100 contributor will be recognized in the time capsule.”

SURREY NOW & THEN: The Friday when Freda stormed through, cutting power for up to a week